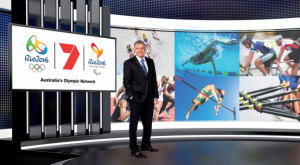 Seven, which signed on as the exclusive broadcast partner until the 2020 games in a deal brokered in 2014, reckons it's on track to smash revenue and audience records as it delivers the most comprehensive Olympic Games coverage to date.

In a deal thought to be worth $100 million for the Rio Olympics alone, Seven has secured all broadcasting rights including future formats and has also become an Australian team sponsor – the only other time it has done this was for the Sydney Olympics. The significance of this is better access to Australian athletes and the team.

The Olympic broadcaster will offer two-and-ahalf times more inventory than in previous games, while pledging it will be the most affordable games for advertisers.

Seven has trimmed the amount of advertising content per hour down to eight minutes from 10 in previous games. This equates to 60% less commercial content than usual programming or 16 clients as opposed to 32 clients in an hour. There will only be 14 sponsors and additional spot buyers, which Seven said offers the greatest cut-through and audience aggregation.

“That combination is proving to be pretty powerful for clients on board and that's why we've had the uptake which is ahead of any games, bar Sydney 2000,” Seven’s chief revenue officer, Kurt Burnette said.

“It will be the most de-cluttered environment we've ever seen on broadcast. The clients that are there will have cut-through like never before.”

“In London, Nine did 300 hours whereas we are doing 900 hours across these three channels,” Burnette revealed.

“To give it some structure it made sense to go into female-skewed and male-skewed plus the full snacking everything channel, which is Seven.

“Then you've got the digital channel where you can watch whatever sport you want. You can go to Greco-Roman wrestling, sailing, swimming, golf – whatever you want.”

The extra hours of coverage means that Seven can reduce rates, which Burnette said makes Rio the most cost-effective games for advertisers – sponsors or not.

Free live-streaming will be available across all devices and there will be up to 600 hours on demand.

Behind a paywall there will be up to 36 different streams that will show just about every sport that takes place – a first for Australian TV. Ads behind the paywall will be served programmatically.

“A criticism in the past has been that we were only showing Australian [athletes and teams] and questions around why we couldn't show more of certain sports like football. Well now we can,” Seven network director of sport sales, Patrick Moloughney, said.

Seven is working closely with clients, creative and media agencies to create advertising content across all devices.

“It's not 17 days we are selling here, it's a marketing platform that far extends beyond just 17 days of competition and ceremony,” Moloughney added.