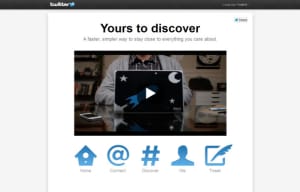 Twitter is doing content deals with media companies across Australia as it seeks to monetise its platform. The plan is to split ad revenue fifty-fifty with the networks, selling packages both via Twitter's sales teams and the networks' own.

The company has signed agreements with Southern Cross Austereo and Network Ten ahead of the launch of Amplify, likely to roll out early next year. Under those agreements, broadcasters push out content – such as video and audio – onto the platform which is sponsored by an advertiser. Twitter and the media owners share the sponsorship revenue equally.

Amplify has been in play in other markets for some time. In the States, for example, Twitter has tied up deals with ESPN to show basketball clips.

Ahead of its IPO Twitter is also working out how it will monetise its offering and has a research partnership with Nielsen that has been running the numbers on how social interactions drive TV traffic. The theory is that it drives viewers to watch live TV. At Cannes earlier this year Twitter chief scientist Deb Roy explained how Twitter could become the “social soundtrack” to TV, illustrating its amplification effect.

Sir Martin Sorrell is also a fan and WPP is one of a number of advertising companies that have cut deals with Twitter.

In Australia the company is now in talks with all the TV networks, and media owners in general, in a bid to sign them up to Amplify. While there has been much written about the social networks aiming to take TV ad revenues, Twitter's line is that it comes in peace, and can create a win-win situation for itself and media owners.

The company is beefing up its presence in Sydney and has a number of new hires in the pipeline. Its sales force is likely to grow should it carve out a number of Amplify deals.

While both Twitter's sales teams and those of the media owners will aim to sell sponsorship to the highest bidder, it is understood that broadcasters' main sponsors will be given consideration by both teams and that direct competitors will not be sought for Amplify sponsorship deals.