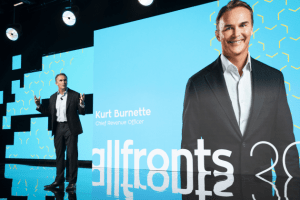 Seven chief revenue officer Kurt Burnette believes a 52-week "always on" strategy, backed by a consistent sporting schedule and further broadcast video on demand (BVOD) investment will lead the network to its 13th straight year on top of the ratings.

Burnette told AdNews it is time to forget the concept of the "traditional" 40 week ratings year and include weeks throughout summer.

He said Seven's programming strategy in 2019 is designed around creating consistency across the network's key mediums including the main channel, multichannel's and its BVOD platform 7Plus. All of which are backed by a continuous sporting schedule.

"We are investing heavily into every single week of the year now more than I would say we ever have before," Burnette said.

"For the first time in the history of any free to air network, there is 52 weeks of AFL and cricket on the same network. That's the strong base that we wanted to have in place and we've invested heavily in it because sport is still the biggest piece that people still flock to and advertisers want to be a part of."

According to Seven, in January year to date, the total people viewing is down but on people 25-54 it's 7% up year-on-year, which Burnette says talks to the "demo richness" of the culmination of the Test and Big Bash cricket codes.

In 2018, Seven and Foxtel invested $1.2 billion into a shared deal with Cricket Australia, with Seven securing the free-to-air rights for the Big Bash League and Test Cricket.

Burnette explains this strategy has led to an influx of more male viewers, as the tennis had previously provided a condensed female audience, mainly only over a two-week period.

He said this has fed directly into Seven's multichannel strategy and growth, with the likes of 7Mate; the channel designed predominately around a male audience, notching up steady growth in overnight audiences.

Seven believes a 52 week sports schedule also creates the "greatest cut through and engagement", giving advertisers and brands more than individual show sponsorship, instead it's aboutconsistently featuring their brands across the entire network as part of a natural spot buy.

"It works because there's less commercial content in there, the brand stands out, people are far more engaged in sport than they are in anything else," Burnette added.

"Sport is poweful because of the reduced content, high engagement, while integration and our line-up for the year - My Kitchen Rules, House Rules, Australia's Got Talent and the return of My Kitchen Rules into the back quarter of the year - allows for an always-on, fully integrated platform supported by news and current affairs," Burnette said.

"I'm yet to come up to hear of a customer who has worked through integration - or very rarely - that hasn't had a successful outcome when they do integrate."

Burnette said this year is about continuing to educate the market on the importance of BVOD in the media agency planning and buying process.

He said the attitude that it was something competing with other digital platforms was "completely wrong", as there was no comparison between the two, adding that it was a "long-form, brand safe and engaged product".

"We're actually actively encouraging people to consider that customer journey as it relates to broadcast and BVOD. We want people planning for it, not because we own the businesses but because that is the natural course of viewing behaviour," Burnette said.

"Our objective is to just keep highlighting that fact, that broadcast and BVOD are as one, should be as one and represent a very, very powerful and safe environment for advertisers to be in."

Burnette said the responsibility was on the networks was to prove its worth to the market, as buyers continue to have avarying products and verticals "continuously thrown at them".

He said networks can't expect buyers to simply flock to BVOD because "we'd like them too", adding it needs to be about continuing to show that facts, which for Seven include demand for total BVOD usage over summer hitting 62%.

"It's about the ease of being able to trade it, as often traders are sitting in different parts of the business on the buying side, with the digital and broadcast traders sitting separately," Burnette said.

"They're starting to bring it together as a screen strategy and the more that happens, the more it will be bought that way."

Last year Seven secured its 12th year in the row at the top of the recorded ratings period.

Seven also declined to comment of the performance of MKR earlier this week  following the debut of the reality cooking show and Nine's premier of Married at First Sight, which contributed to MKR's lowest first episode ratings to date.