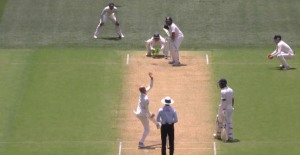 Seven's coverage of the first day of the first test cricket match for summer has drawn in an average audience of 414,333 metro viewers for the entire day.

The first day, which saw Australia face India, the highest ranked test cricket side in the world, was split into three sessions, with session one, two and three drawing in 301,000, 398,000 and 544,000, respectively.

The match saw Australia strike early against the powerful Indian side, sending the visitors to the sheds with a score of 9-250.

In comparison to Nine's coverage at the same time last year, taking the highest rating session, which is most commonly the final for the day, the numbers are down by over 500,000.

However, it is important to note that last year's first summer test was between Australia and England for The Ashes, one of the most historic and highest rating sporting clashing in Australian television.

“We are thrilled with the ratings of day one, which has surpassed our forecasts," Seven chief revenue officer Kurt Burnette said.

“Our production and commentary teams have hit it for six, proving once again that no-one does sport like 7Sport. And this is just the beginning – we still have the Day/Night tests and men’s Big Bash to come. Roll on summer."

The 2.67 million figure is the combined audience from the whole day.

What was most surprising about the numbers was the impact they had on the overnight main channel share battle.

Despite capturing a reasonable average viewership for the majority of the day, Seven was unable to beat Nine when it came main channel share, with Nine taking a 22.4% share compared to Seven's 17%.

Over on Foxtel, which is simulcasting the summer of cricket as part of its rights deal with Seven, ratings for the first test got as high as 214,000, with an average 171,000 viewers across the day.

This is the first match to reveal the impact Foxtel will have on Seven's ratings, with a third of the average viewership for the first day choosing to view the match on the pay-TV network, which offers ad-break free coverage of every game live.

AdNews will be revealing deeper analysis of the summer of cricket as it unfolds.