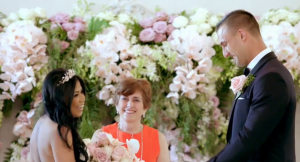 Taking the top spot in primetime, and beating rival network Seven's premiere of its tent pole reality cooking show My Kitchen Rules (MKR), MAFS was up on last year's debut in metro total people by 9.8%.

The total of 1.32m viewers nationally was an improvement on last year's ratings, which saw the 2018 launch draw in 912,000 viewers. This is a 3.2% increase compared to season five's first episode.

"We know the audience, across television and especially in BVOD on 9Now, will only build from here as Australia’s biggest reality program takes hold of the national watercooler conversation.

“We are also heartened to see the growth in the launch audience for Married at First Sight. This only underlines the reasons why Nine chose to make the switch to tennis and the amazing launch vehicle it is for our first quarter programming.”

The strong premiere for Nine also boosted the main channel to secure the overnight audience share win, taking a 22.4% slice, narrowly beating Seven, which had a 21.6% main channel share, followed by Ten with 11.3%.

MKR, which premiered its 10th anniversary season last night, drew in a metro audience of 816,000 as it aired in the earlier time slot of 7pm, compared to its usual 7.30pm time. Last night's episode was the lowest rating launch episode for the series to date.

The show was once again down on its opening night figures, with last nights debut falling by 31% when compared to last year's 1.18m metro viewers. This sharp dip of close to 400,000 viewers continues the trend in the show's declining viewership, which had a 2017 debut audience of 1.31m.

Despite this, Seven managed to win the night as a network, with its news bulletin and coverage of the Big Bash league on 7Mate leading it to a 33.6% overall network audience share, with Nine following

As the ratings season kicks off, Ten's I'm a Celebrity Get Me Out of Here began to feel the sting of the return of the major networks' tent pole reality programming, drawing in 676,000 overnight.

The show, which had enjoyed a strong opening week after debuting two weeks earlier than normal, has begun to slow following the finals of Nine's Australian open last week.

The strong premiere of MAFS does not bode well for the rival networks, with the show known for slowly building its audiences throughout the course of the season. Last year's finale was one of the most viewed shows of the year drawing in 1.8m.

The show was also one of the most streamed broadcast video on demand programs of 2018, with Nine expecting another strong performance on its 9Now platform this year following significant investment in its dynamic ad insertion technology.