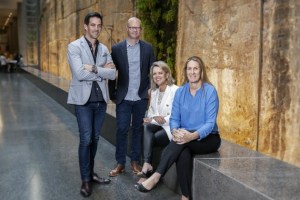 Ogilvy may be a traditional agency by name, but the dramatic transformation it's undergone is anything but conventional. It now has no less than four managing directors across its Sydney and Melbourne offices; has axed its various internal P&Ls, integrated its digital acquisition Bullseye and has big plans in the marketing automation, consultancy and media sectors.

Most recently it also moved its Sydney office to a single floor to encourage more cohesiveness between departments.

As one of the most iconic names in advertising, Ogilvy has both benefited and suffered from its legacy name; some brands love the fame associated with the agency, others associate such heritage with slow pace and 'traditional' creative work. However, those within Ogilvy, including its four recently appointed managing directors, describe the agency’s evolution over the last five years as radical and now view the business as a piece of software that is constantly updating.

McEwan, who has been with the company for nine years, said it is the significant changes mentioned above, under Fox, that have made Ogilvy “merger resistant” to the changes happening at other WPP-owned agencies.

His comments follow WPP agencies Y&R being merged with VML and JWT lumped with Wunderman. While Y&R was missing a digital backbone and needed VML’s capabilities to survive in the new world order, McEwan argued Ogilvy is in a better position to standalone.

“Bringing digital into the agency, acquiring Bullseye and dissolving the P&L sounds like a really difficult thing to do because we’re seeing other agencies grapple with it today. In reality, we bought the business, dissolved it and then set structures around it to make it flow,” he said.

“We’ve created the first wave of transition and now we’re working on the next wave.”

Embracing personalisation and leveraging Verticurl, a marketing automation business, is next on the agenda for Ogilvy, MacMillan said.

Ogilvy acquired a majority stake in Verticurl in 2013 and later increased its stake to 100%. The Singapore-headquarted business offers demand generation and marketing automation services and employs more than 160 people in offices across Japan, China, Australia, Korea, India, Indonesia, the UK, Germany, the US and Canada.

In 2018, as part of Ogilvy's next chapter led by global CEO John Seifert, a martech centre was launched with 900 staff with Verticul playing a significant role.

MacMillan has been at the business for around seven years and much like Kissane, Holland and McEwan, has an impressive tenure in an industry where three years in a job is considered a fair run.

For those that would argue having four managing directors is top heavy for an agency, the longevity of leadership at Ogilvy is what leads to consistent work, the four agreed.

AAMI in Melbourne and KFC in Sydney are often touted as the 'poster child' for what Ogilvy can achieve. AAMI’s Smartplates took out a number of gongs at Cannes Lions and signalled Ogilvy’s own digital transformation.

The KFC creative has gone from strength to strength in the last decade while also evolving its media mix, forgetting the days of the $1 million TV ad and shifting its priority to short, digitally-led content. On both clients, Ogilvy has expanded its remit which has contributed. It has also added smaller wins such as hotel booking website Wotif, which contribute to its 10% growth year-on-year.

“It’s important to recognise the creative resurgence that Ogilvy has gone through in the last five years. If you look back to previous incarnations of this brand, we’ve always been big. Perhaps we could have been accused of being a little bit retail focused or too production orientated, but the evidence from creative awards standpoint proves where we’ve come from,” MacMillan said.

Despite a number of accolades, McEwan recognises that there are some clients that won’t ever want to work with Ogilvy, preferring an independent or lesser known agency. He said it’s a misnomer that a smaller client wouldn’t get the attention it needs in a bigger, WPP agency.

“We are genuinely excited about all sizes of business and that adds to the fabric of the agency. It also provides our people opportunities to do interesting creative work and is often strategically more challenging,” he said.

He listed the agency’s work on Swinburne Online and the Victorian Government, which brings Silicon Valley startups to Melbourne, as examples of smaller projects.

With a new CEO on board globally at WPP, Mark Read, the group is looking at incorporating more media thinking into its creative agencies. One way the holding company intends to do this is through leveraging M Platform; a media planning, data and digital tool.

Having M Platform being universally accessible across the group will enable Ogilvy to integrate more media planning into its campaigns, Holland explained.

“With WPP we have the option to access a lot of partnerships but we do want to infuse more media thinking,” she said.

Consultancies were a hot topic in 2018 and Ogilvy isn’t ignoring their presence, intending to build and launch a consulting sub-business this year. McEwan said agencies can no longer sit and wait for a brief – they have to involve themselves deeper within the problem, which he said is a huge shift he has seen in how clients are leveraging Ogilvy.

“The Holy Grail is still out there and we’re all still chasing it. Ogilvy is no exception to that, but we believe we’re well placed and we’ve made great strides", McEwan said.