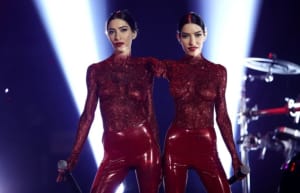 The Veronicas at The ARIAs

Nine will be screening the 31st Aria Awards in November, replacing Ten as the official broadcaster.

Ten had the rights from 2002 to 2008 and again since the 2010 awards after a brief stint at Nine in 2009. Ten did not renew the contract earlier this year, leaving it open for another network or media owner. The decision was made a month before the network fell into administration.

Nine head of content, partnerships and development Adrian Swift calls the award show a fantastic addition to the channel’s slate.

Nine has recently been on a high due to the huge success of Ninja Warrior, which has topped the ratings since its debut and prompted Seven to pull its Big Little Shots ahead of its Sunday launch.

Sony Music CEO and Aria chairman Denis Handlin says he is delighted to bring the award show back to Nine.

“The Nine Network has a long association with the ARIA Awards, having hosted the event's inaugural broadcast in 1992.

“We look forward to working with Nine's CEO Hugh Marks and his team to produce a world-class event that celebrates our incredible artists and their amazing achievements this year," he added.

The move also comes days after Ten backers Lachlan Murdoch and Bruce Gordon approached the ACCC to to review a potential bid for the network.