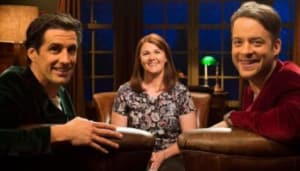 Nine’s True Story with Hamish & Andy pulled in an average metro audience of 991,000, beating Seven’s House Rules which had 965,000 viewers. Ten’s MasterChef drew in an average of 871,000 metro viewers. True Story has had a strong lead in the ratings since the show’s debut, with 1.28 million metro viewers tuning in for its first episode. While True Story pulled in the largest audience, Ten’s Have You Been Paying attention won all three key demographics, followed by MasterChef. True Story took the third spot in each demographic. Seven’s main channel had 19.5% of daily audience share, Nine followed closely behind with 18.3%. Ten had 15.7% of the audience share.

M&C Saatchi Mobile has appointed Bobbie Gersbach-Smith to the newly created role of ANZ director, following a reported surge in mobile ad spend in Australia and New Zealand this year. Gersbach-Smith has spent the past eight years in the digital sector, most recently as an account director at M&C Saatchi Mobile. The agency is forecasting mobile ad spend in the ANZ region to account for over 50% of digital spend in 2017. M&C Saatchi Mobile is currently working with Sportsbet, Hotels Combined, iHeart Radio, Microsoft and Carousell. In other M&C Saatchi news, Australian founder Tom Dery recently stepped down as worldwide chairman of the agency.

Former Blackmores CEO Christine Holgate has been appointed CEO of Australia Post, taking over from Ahmed Fahour. The move comes a week after the announcement AusPost would be reviewing its creative roster in a closed pitch. According to ABC News, the hire will help Australia Post pursue its Asian strategy, due to Holgate’s previous experience in successfully growing businesses in the region. She will officially start at AusPost in mid-to-late October. Fahour resigned earlier this year after his $5.6 million salary was revealed after a long battle with the Senate committee. Fahour had been CEO for seven years. The new hire will likely delay the appointment of a creative agency.

The Australian apologises for Ten gaffe