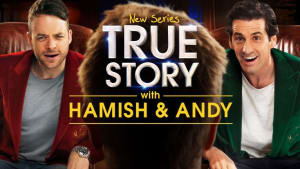 The show pulled in an average metro audience of 1.07 million, down 200,000 from its debut, yet more popular than Seven's House Rules and Ten's MasterChef.

True Story was most popular with the 25-54 demo, making up half of its viewers. The show peaked nationally at 1.83 million.

House Rules was in the top position for a number of weeks, however has slipped since the debut of True Story. The home reno show drew in an average metro audience of 999,000 for its Monday night episode.

Ten's MasterChef fell to eighth position in the top 20 ratings, with an average metro audience of 847,000, and peaking nationally at 1.55 million.

Ten's Have You Been Paying Attention, which aired after MasterChef at 8.45pm, came in 10th in the ratings with an average metro audience of 799,000. However, the news comedy show won both the 16-39 and 18-49 demographics for the night.

The Seven Network had 39.2% of prime time audiences of the commercial networks. Nine followed in second place with 35.8%, while Ten picked up 25% of viewers.