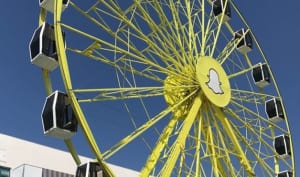 Shares of Snap Inc fell below its IPO price on Monday for the first time, roughly four months after the maker of Snapchat went public in March with an IPO of $17. Snap shares traded as low as $16.95 before closing at $16.99, down around 1.1%. Accordingly to the Los Angeles Times, falling below an IPO price for the first time is a common occurrence as it happened to Facebook and Twitter. However some investors argue the drop points to a decreased public interest in the app. More on Snapchat here.

McWilliam’s Wines Group has appointed Bohemia to its Evans & Tate, Henkell and Mionetto Prosecco brands following a competitive media pitch. Bohemia will be responsible for the development and execution of the full media strategy and implementation of its Evans & Tate and Henkell Trocken brands within the Australian market. The shop will also help launch the Prosecco brand Mionetto and two new Henkell varieties within Australia. Commencement of campaigns across all brands will roll out first half of FY18. Bohemia's Sebastian Graham recently left the agency after two years as group performance and technology director for Yahoo7.