NAB and Clemenger reveal how the bank fights category cynicism 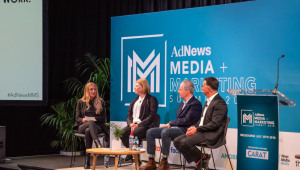 As revelations against the big banks continue be unveiled by the Royal Commission, trust in big banks is at an all-time low. But instead of hitting pause on advertising, like some of its competitors, NAB has continued to fight the cynicism around its services and center its campaigns around Australians, said former NAB GM of brand experience Michael Nearhos.

Speaking at the Media + Marketing Summit in Melbourne, Nearhos, who recently joined Virgin Australia as marketing director, said NAB has deliberately continued to advertise while its competitors have “pulled back significantly”.

“We think we have a message to convey. We think it’s an authentic message. We think it’s one that engaged our business but also our employees. But we have to be careful how we advertise, in what context and what channels in which we do it,” Nearhos explained.

“Our metrics show it’s working for us. Our consideration scores are great, but that’s not to say there’s no an issue. Reputation across the category is suffering at the moment but we can see that our communication is working and customers are giving us the benefit of the doubt.”

Nearhos comments follow damming findings that have tarnished the reputation of CommBank, Westpac, NAB and ANZ. Earlier this year CommBank was found to be charging deceased people for its services and most recently, NAB staff were exposed for the false witnessing of documents.

To challenge the cynicism around the banking category, NAB overhauled its positioning under former CMO Andrew Knott,  shifting towards a more emotive approach with its ‘More than Money’ tagline.

Nearhos described the move to More Than Money as an “un-bank like” approach.

“We didn’t really want to produce something that was normal for the category. We wanted to be quite different and to take risks, be bold and not be afraid to do something unexpected,” he said.

“We know in the current era, how we take work to market is absolutely important. We very quickly put the customers and people at the center of our advertising, rather than talking about just banking. It can’t be all about us. We almost stripped back a lot of our advertising to make sure that is felt by the customer.”

Clemenger creative chairman James McGrath, who has worked on the NAB account for over a decade, said NAB and the agency have had to be incredibly self-aware in the development of these campaigns and how it could be perceived due to the negative sentiment around banks.

He also said there’s a level of complexity with its advertising due to people’s own relationship with money not always being positive.

“People’s own relationship with money, or lack of relationship, is at the very heart of what is difficult about NAB’s communications,” McGrath said.