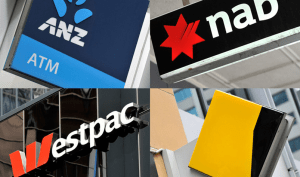 The Royal Commission into the banking and financial services industry is having a significant impact on the industry's ad spend, according to recent statistics from the Standard Media Index (SMI).

As the Royal Commission continues to expose incidents of corruption and poor corporate behaviour, the domestic banks and other financial services (OFS) categories delivered the third and fourth highest growth in ad spend by dollar value this month (+$5.7 million and +$5.3 million respectively).

According to the Q1 data from SMI, both domestic banks and OFS are reporting record levels of Q1 ad spend, with the domestic banks category up 28.6% from Q1 2017 and OFS (which includes overseas banks, credit card/payment companies, credit unions, superannuation funds and financial advisers) growing its ad spend by 20.7% in the same period.

Domestic banks continue to spend more than 45% of their media budgets on digital media but the largest growth has been in outdoor, which has seen its share of this category’s spend grow from 14.4% last quarter to 18.3% now.

In the OFS category, the growth continues to come from digital media, lifting to 48.4% from 44.7%. This shows that digital media accounts for nearly half of advertising from financial services.

"There’s no doubt Australia’s finance market has come under intense scrutiny in recent months, so it’s not surprising that a variety of companies in this sector are taking the opportunity to portray some of the more positive aspects of the industry and are also growing their media investment to do that,’’ SMI MD Australia and New Zealand Jane Ractliffe says.

The growth in spend by the banking and financial services industries was also a focus of last week's episode of Gruen, as the Big Four banks captured the attention of panellists. 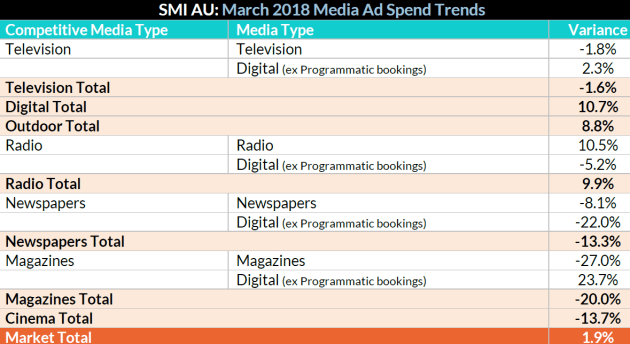 She also suggested Westpac, and other banks, should "remain silent for a while" and pause their advertising, adding it was a "questionable" move to run such a significant campaign during the Royal Commission.

Ex-Leo Burnett boss Todd Sampson disagreed, adding that advertising was one of the only ways the banks could control their messaging in a time of crisis.

Within the digital media, the most notable trend was the ongoing surge in ad spend to social media sites (+25.3% YOY).