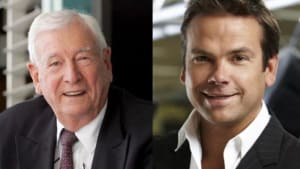 WIN Corporation owner Bruce Gordon and News Corp co-chairman Lachlan Murdoch have proposed to pay off Ten's existing secured debt and will draft a restructure plan for the business.

The joint venture is designed to ensure Ten doesn't default on its current debts, which would expose Murdoch and Gordon's investment companies to liability.

It also has a provision to prevent administrators from looking at other suitors for the business in the event of a sale.

The agreement would mean Murdoch and Gordon could eventually launch a bid to increase their shareholding or buy Ten as part of a restructure plan if media ownership laws are relaxed.

For this to happen, the government's media reforms package, which plans to abolish the two-out-of-three cross-media ownership law and the 75% reach rule, will need to pass through parliament.

The reach rule prevents Gordon from owning any more than the 14.96% stake held by his investment company Birketu.

Murdoch, through Illyria Investment Trust, has a 7.7% stake and is prevented from taking a controlling interest by the crossmedia ownership laws.

In a letter to the ASX, Birketu director and Bruce's son Andrew Gordon states the letter “does not constitute a proposal on the part of Birketu or Illyria or any entity either of them may control to make a takeover bid for Ten's shares”.

The letter also makes clear that the joint venture proposal won't influence day-to-day operations of Ten and how it works with businesses linked to Gordon and Murdoch.