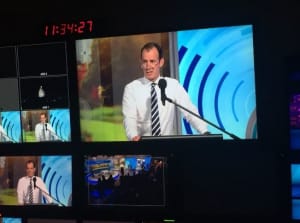 Australia's third-placed TV network Ten has entered voluntary administration after three of its biggest commercial backers shied away from providing ongoing support to the business.

Ten said it has already made progress on its transformation process with initiatives expected to increase earnings by $50 million in FY18 and more than $80 million per annum by FY19.

It has also made progress renegotiating new content deals with US production houses.

"In relation to the renegotiation of programming contracts, the Company has agreed in principle the vast majority of the commercial terms of replacement volume content supply agreements with its US studio partners, Fox and CBS, although final terms have not yet been formally agreed," Ten said in a statement.

"The effect of these replacement content agreements, if finalised and implemented, would be to reduce by approximately 50% the Group’s future liabilities for US content, while still allowing TEN access to the best productions of those studios over the medium term."

Ten expects to save a further $22 million in FY17 and $12 million in FY18 in costs if changes to the federal government's licence fees are passed. The regulations are part of a wider media reform package that is expected to be tabled in Parliament tomorrow.

On Sunday, the Australian Financial Review revealed that Ten's billionaire backers Lachlan Murdoch and Bruce Gordon would not support a an extension to the network's loan facility, which expires in December. They were both guarantors and their support is regarded as vital in helping Ten secure an even larger loan extension of $250 million.

The other guarantor, James Packer, had already indicated he wouldn't be backing the business any further and has been trying to offload his equity in Ten.

Once news leaked to the press, directors at Ten called on the trading halt to give them 48 hours to come up with a strategy and messaging they could take to market without Ten's share price tanking even further.

Without the new loan facility, Ten is not a viable business because it is unable to service its debts and the board has come to the conclusion administrators would be in a better position to fully assess the business and decide whether it should be sold off or recapitalisation pursued.

Ten's earnings (EBITDA) forecast is to that it will lose $30 million this financial year and it has begun a transformation program to strip away as much cost as possible and focus the business on where it makes money.

What are these cost/debt problems?

Another major cost is TV licence fees. As mentioned above, these will be cut if media reforms are passed and improve Ten's balance sheet.

What is a VA and how will this affect Ten?

A voluntary administration (VA) is an insolvency procedure where directors of a troubled business bring in external administrators to assess the business and recommend how it should proceed.

Administrators may decide to return the company back into the hands of directors with recommendations on changes that need to be made, but it can also lead to a formal administration or urgent liquidation of the company's assets.

In the case of Ten, it allows the network breathing space for an independent assessor to determine how it should restructure or how a sale might proceed. An advantage of a VA is that it will get creditors off Ten's back until it can be worked out how these debts can be repaid or terms renegotiated.

Any sale would mean that guarantors get first dibs, which could interest Murdoch and Gordon, but not Packer, who is more focused on his gaming interests.

Will Murdoch and Gordon swoop?

It is perfectly legitimate that both would have serious doubts about Ten's ongoing viability because of the US content deals. Murdoch is a co-chairman of News Corp and would understand the inner workings of content deals with 21st Century Fox, one of its companies.

However, both have propped up the business for a reason and are likely to be interested in increasing their shareholding (interest) if media ownership laws are relaxed and they get a good deal. This could take the form of a debt/equity swap.

This would make sense for several reasons. Murdoch, who owns 7.7% share of Ten through an investment vehicle, is a former chairman of Ten and co-chairman of News Corporation, which part owns Foxtel.

Foxtel has a 13.9% share of Ten and the two work together to produce some TV shows, like Gogglebox.

There are definitely synergies between Foxtel and Ten if a merger or closer collaboration were to take place. For example, they could pool Sky News and Ten Eyewitness news resources as well as Fox Sports and Ten sports.

For Gordon, combining metropolitan and regional TV assets and operations would help shore up both businesses in a challenging advertising market and give him greater influence in the metro market.

The government's media reforms package has wide industry support but there is still some opposition on certain provisions about cross-media ownership from Labor, the Greens and One Nation. This decision could have a major bearing on Ten's future, particularly who is likely to buy the network or parts therein, if it is sold.

Administrators will come in an work closely with management, employees, suppliers and content partners to assess its financial and operational health.

Usually what happens is that duplication and poorer performing parts of the business may be cut if necessary, but not a huge amount should change in terms of day-to-day operations until a review is concluded and the administrators decide on whether it should be sold and how.

One scenario unlikely to occur is that Ten's signal will switch off. Australia's third-largest TV network needs to get its ship in order, streamline its operations and focus, and find a way to alleviate its debt burden, but it's still a relatively healthy business that produces great content and has managed to grow its audience share and revenue in a declining market.

There are plenty of positive signs to work. Ten also has wealthy and  media savvy investors circling with too much of a stake in the business to allow it to collapse.