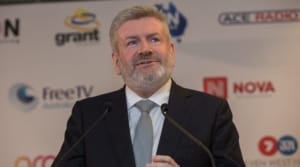 Addressing journalists only hours after Australia's third commercial TV network had entered into voluntary administration, Fifield said Ten's woes was a reminder to reform opponents that the biggest threat to diversity in the media was media companies collapsing.

“A key element of this package that's in contention, thanks to the Australian Labor Party, is [the two out of three rule]," he said.

“Network Ten has been at the forefront of arguing this outdated law, this outdated rule is one that needs to be consigned to history.

“We want to unshackle Australian media organisations so they have more options about how they organise themselves to remain sustainable in the future.”

The media reforms package is scheduled to presented to the House of Representatives tomorrow and the Senate next week.

The media industry unanimously supports the package and it has the political backing of senators from the Liberals and National Party as well as influential crossbencher Nick Xenophon.

Labor, the Greens and One Nation have indicated they are opposed to the two-out-of-three rule on the grounds that too much concentration in any given market would affect diversity of voice.

The rule, drafted before the dawn of the internet, is designed to prevent media moguls from owning a newspaper, TV station and radio station in a single market.

Such opposition is dubious in today's media landscape because technology has enabled ways of circumventing the rules.

There are also provisions in the media reforms package to safeguard the amount of local content media organisations must produce in the event larger metropolitan broadcasters merge with regional affiliates.

Fifield said he will continue to "argue, argue and argue" opponents to keep the rule as part of a "comprehensive" media reforms package.

He said that the greatest risk to diversity of voice isn't one media company owning too much space, it's too few media companies existing.

"I don't think there is anyone out there who cares about Australian media industry who is pleased to see a significant media organisation placed into administration," Fifield said.

“The Australian media industry is facing unprecedented competition....we're doing our bit to unshackle Australian media organisations, to help their viability so they're in a better position to compete with [global] digital platforms.”