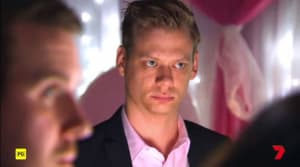 My Kitchen Rules has come out on top of the first official evening of the ratings year, ahead of Ten's I'm A Celebrity...Get Me Out of Here and Married At First Sight.

MKR, which introduced villains Tyson (probably a sith lord in a previous life) and Amy as the main course for this season, drew an average audience of 1.31 million in Australia's five capital cities, which is 17% down on last year's launch of 1.58 million.

This is testament to strong competition from I'm A Celebrity, which attracted 959,000 and Nine's Married At First Sight, which pulled 820,000 viewers.

MKR dominating is not entirely unexpected but the other reality formats will be pleased with how they have matched up against Seven's juggernaut.

I'm A Celebrity, which introduced two new celebrities in Tziporah Malkah (former model Kate Fisher) and male model Kris Smith (Danni Minogue's ex-beau), had a similar performance to its opening night when it was up against the tennis.

The Celebrity cast this year perhaps lacks a Shane Warne type figure, but has developed a strong, loyal following and plenty of social talkability.

Evidence of this is that the episode pulled the biggest regular season audience outside of a launch or finale, which is up 31% on the 2016 average, perhaps drawn to the mystery of who would be joining the jungle.

Kris Smith and Tziporah Malkah tangle with bees on I'm A Celebrity.

The first episode of this season is marginally up on last year, but up against much stiffer competition.

The casting and production value of this season appears more impressive than recent years with the addition of Jonathan's crazy ex-girlfriend (or sister) adding plenty of spice to proceedings. Tomorrow features a fussy male stripper, while there are also identical twins and a runaway bride to look forward to.

That moment when your crazy ex (or her sister) interrogates the bride.

“There has also been a very strong reaction to the program online with Married coming number one in the Nielsen Social ratings and the preview of episode one on 9Now drawing more than 47,000 streams ahead of last night," Nine's chief sales officer Michael Stephenson tells AdNews.

Whether either Nine or Ten can make more ground on Seven's stellar line-up remains to be seen. The strength in Seven's line-up is evident thoughout the evening, not just with MKR.

“It was a night of wins for seven in all people and across the key demographics - against a very targeted attack,” Seven's programming chief Angus Ross tells AdNews.

“The Australian Open tennis has once again proved to be the ultimate launchpad for our new schedule - anchored by The Chase, Seven News, home & away, MKR and our new smash hit Bride & Prejudice. This is just the beginning of our fast start to the year - over the coming weeks we will be rolling out 800 Words, Hoges, Murder Uncovered, and another series of Seven Year Switch.”

For Nine and Ten, the target is to chip away and win over key demos, looking for a chink in Seven's solid armour. And after a night a viewer taste-testing and channel hopping, the real test now begins to see which formats will stick.