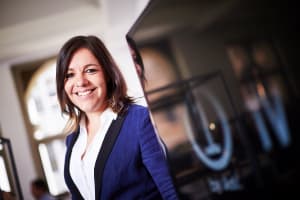 Our Industry Profile takes a weekly look at some of the professionals working across the advertising, ad tech, marketing and media sector in Australia.

It aims to shed light on the varying roles and companies across the buzzing industry. This week we head to Sydney to speak to the senior director of programmatic TV at AOL Platforms ANZ, Yasmin Sanders.

It’s fair to say that the last six months have been extraordinary and we are now well on our way to becoming the number one global mobile media technology company.
We launched AOL Platforms in Australia and South East Asia; brought the HuffPost to the Australian market with Fairfax Media; partnered with MCN to launch the world first private programmatic television marketplace; expanded our global strategic partnership with Microsoft in advertising and search; and of course we were acquired by Verizon Communications, which brings our scale to the size of Facebook and Google.

The pace, the energy but most of all having the privilege to work alongside some of the smartest, savviest people in our industry. We’re at the forefront of innovation and we’re getting a lot of traction globally about the great things we’re doing in the Aussie market, it’s exciting, terrifying and extremely addictive.

I’m a TV gal through and through. Started my media career in sales 14 years ago for Seven Network and Multi Channel Network (MCN). My inner geek surfaced after working through my Christmas holidays in 2005 where I presented a strategic operational proposal to MCN management, which led to me being appointed to a newly created role of training supervisor. Since that time my roles have evolved and grown including heading up operations and systems development at Network Ten, where IT was all about driving operational efficiencies by identifying and implementing user-friendly and innovative system solutions, to meet dynamic business requirements of media professionals across the sales, digital, traffic, research, revenue integration and finance divisions.

Being able to call myself a ‘screen native.

Tell us one thing people at work don’t know about you:

I used to dream about being one of Janet Jackson’s backup dancers. I suspect the team probably won’t be surprised by this revelation after my recent performance at our APAC conference when ‘the worm’ and ‘running man’ may have made an appearance.

It’s not so much a networking tip as a general life tip I use in all facets of my life – and it’s pretty simple. Be warm, authentic and honest and you’ll find it often leads to trust. If your colleagues and clients trust you, you’ll all have the confidence in each other to reach your end goals.

Favourite restaurant for a business lunch is:

The Greens at North Sydney, mainly due to its relaxed vibe and delicious food.

I love a bit of humour, so the Old Spice ‘the man your man could smell like’ did it for me. A close second would have to be ‘Its Time, Get Up’ for marriage equality. Its viral success shows just how powerful clever content can be.

Must have gadget is:

“Turquoise: A Chef's Travels in Turkey”. I tend to read cookbooks from cover to cover on rainy Sunday afternoons (then cook and eat for the remainder of a Sunday evening).

‘1% inspiration and 99% perspiration’ – alternated with ‘No risk, no reward’.

Like some of my colleagues, I fell into it after completing my degree and have never looked back.

If you weren’t doing this for a living:

In five years time I’ll be:

Working with innovative international partners leading a division known for making revolutionary leaps in the ad tech space who love their job just as much as I do.

Did you catch these other Industry Profiles?

Want to take part in Industry Insights or have some one to nominate? Email pippachambers@yaffa.com.au