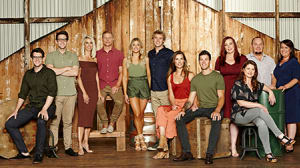 The show, in which teams compete to win the deed to a house by going through a series of reno projects, was ahead of both Nine's The Voice and Ten's MasterChef, as well as Nine News Sunday.

Seven and Nine's main channels were neck-and-neck for Sunday's daily audience share at 22.4% and 22.3% respectively.

Ten's MasterChef, which pulled in an average metro audience of 737,000, was the second most popular show in the 16-39 demographic, however dropped with older demos. The cooking show peaked nationally with 965,000 viewers.

Of the commercial networks, Seven had the greatest share of audiences with 39.5% of audience, Nine followed in second place with 35.2%, while Ten picked up 25.3% of viewers.

The most viewed shows of the whole week were Seven News followed by Nine News and The Voice.