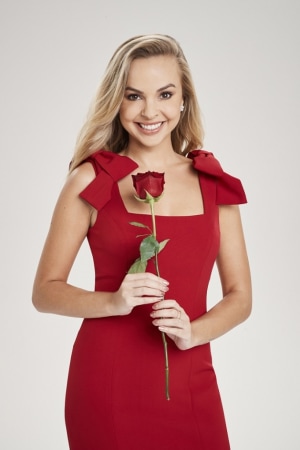 Gogglebox star and I'm a Celeb contestant Angie Kent has been revealed as the next Bachelorette, taking on the titular role for the upcoming season.

Known for her role on Gogglebox as a 'couch critic', Kent rose to fame on the show that lets "everyday Australians" dissect weekly TV, starring alongside her friend Yvie Jones.

According to Ten, after years of taking care of the other people (and the rescue dogs) in her life, it’s time for Angie to put "matters of the heart first" and take the leap.

The fifth season of The Bachelorette Australia will follow Kent as she navigates a world full of suitors, cheese platters and extravagant dates all in the name of "finding Mr. Right".

“I’ve always been the girl who loves to make everyone laugh, but now I reckon it’s time to have someone to laugh with me, rather than at me," Kent said.

“I’m at a place now where I have loads of self-love, but I’m also open to all of life’s amazing possibilities. So, if 20 or so fellas want to join me, have a laugh and potentially be my perfect partner in life and love – I say - let’s give it a red hot go."

Kent's decision to take on the Bachelorette mantle continues the show's recent tradition of using contestants with an existing public profile.

Ten will be hoping Kent's public profile will be a ratings draw card following last year's series of The Bachelorette, which starred former Bachelor contestant Ali Oetjen. The series was one of its lowest rating, with its finale having the worst performance for the series to date.

Conversely, Sophie Monk's season was a ratings hit with the premiere and finale drawing in 951,000 and 1.6m viewers, respectively.

Ten also recently announced its newest Bachelor for its upcoming season, moving away from recent contestants who had public profiles.

Astrophysicist Matt Agnew will take on the role as the Bachelor for 2019, a deviation from last year's season which featured former Wallaby and international Rugby Union player Nick "The Honey Badger" Cummins.

Last year's season was the best ratings performance for the series to date, with the premiere drawing in 940,000 overnight viewers and the "shock finale", which saw Cummins chose no one, drew 1.2 million.