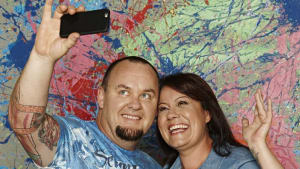 Seven's House Rules took out the top spot in Sunday night ratings, pulling in an average metro audience of 1.28 million and winning all three key demos.

Viewers watched while losing couple Bec and Troy picked a fight with judge Drew Health, as Troy remarked he didn’t have “a clue about what he's talking about”, when the couple was given just three points for their room.

Troy was then told to “shush” by English judge Laurence Llewelyn-Bowen as other contestants watched on in horror.

The exchange proved a hit for ratings, with House Rules surpassing other prime time shows in the 7.30pm slot.

Nine's The Voice drew in an average metro audience of 1.02 million viewers, peaking at 1.75 million nationally.

Ten's MasterChef, which featured celebrity chef and writer Yotam Ottolenghi, had an average metro audience of 794,000 with a national peak of 1.05 million viewers. The cooking show had its biggest pull in 16-39s and 18-49s.

Nine News Sunday had the largest average metro audience out of the news programs, pulling in 1.27 million. The bulletin's swell in popularity could be due to its coverage of Saturday's London terror attack.

Nine's broadcast of the opening State of Origin match on Wednesday ranked first in the top 10 shows of the week, followed by the pre-match show and Seven News Sunday coming in third place.