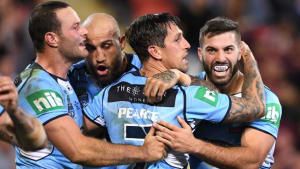 NSW's upset win over Queensland is the best result for Nine and the series. That's the verdict of Nine's director of sport Tom Malone, who told AdNews that Blues dominance in the second half led to a slight drop off in Brisbane ratings.

Malone also said the Telstra Tracker, which debuted last night, could be rolled out in the NRL finals series and become a regular fixture of next season's NRL coverage.

State of Origin game one drew an average metro audience of 2.34 million and a national audience of 3.53 million.

The match produced some of the best rugby league for many years, particularly in the first half, as the New South Wales Blues smashed the Queensland Maroons 28-4 - a rare and cherished win on Brisbane soil.

The result is the cockroach's biggest win over the cane toads north of the border, eclipsing their 32-10 game three romp in 2005.

Nine's ratings peaked at 4.05 million - nearly the size of Melbourne - while the pre and post-match events drew in average metro audiences of 1.5 million and 1.2 million, respectively.

The 'Hayne Plan' soars into the crowd after scoring an oustanding try.

The audience is slightly down from last year's first match, which had an average metro audience of 2.7 million, but it sets the rest of the series alight as perennial favourites Queensland must now win in Sydney to take it to a decider.

Origin matches tend to have stronger ratings in games two or three when more is on the line.

Malone told AdNews ratings were affected by the dominance of the Blues in the second half, particularly when they scored three unanswered tries in quick succession.

"You'll find the Brisbane audience dropped off a bit in the second half around that 50 to 55 minute mark. The rest of the county largely stayed for the duration of the match," Malone said.

"The numbers do move around a bit from year to year and game to game depending on who's playing and where they are playing. It's hard to take games of Origin in isolation.

"We think to get 2.34 million in the capital cities and 3.5 million nationally is an extraordinary ratings result, particularly when audiences are increasingly fragmented.

Man of the match Andrew Fifita cops a cheap one after another bruising run.

On whether the result was what Nine had hoped for, Malone added: "I think it is a good result with NSW winning game one. If Queensland had won game one there might have been a sense of fait accompli for game two or the series.

"It's a great story for NSW winning the first game and now heading to Sydney, but it's also a good story for Queensland to see if they make changes and how they travel to level the series. We haven't had a decider in Origin since 2013."

Last night's coverage was also the first time Nine has used the Telstra Tracker which provides more detailed on-field data such as the distance each player runs, their top speed and a heat map of the ground they cover. This provides viewers with more insight on the industry of each player beyond where the TV cameras focus on play.

Malone told AdNews he believes the Telstra Tracker could become a permanent fixture for next season's NRL competition, but there are a few hoops to jump before that can be confirmed, such as getting the NRL, players, stadiums and other stakeholders on board.

"The Telstra Tracker had a great debut last night. In sport it's all about access and innovation. This was both. You were getting closer to the players than ever before by knowing things like how fast they were travelling and also innovation in terms being able to tap into GPS trackers in real time," Malone said.

"We're grateful to the players for wearing them and also from a commercial point of view, getting Telstra on board was a good result for Channel Nine and the NRL.

"I think it could become a regular fixture for the NRL. We've got an arrangement to use it for this Origin series and that's all for the moment. But it's something we'd like to look at for the finals series this year and then I think a logical extension of that, maybe next year, is to bring it in across other NRL matches.

"It takes a lot of work behind the scenes to make that happen but that's not insurmountable and I think that's the way the sport's coverage is heading."