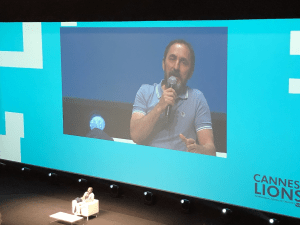 David Droga has admitted he let his ego get out of control in the early days of Droga5 in the US and addressed the hasty departure of ex-chief creative officer Ted Royer on stage at Cannes Lions.

Reflecting on the first three years of Droga5 New York, Australian Droga he said the agency was booming, luring blue chip clients to the fold and starting to pick up metal at all the big awards shows. And as the agency grew, so did his confidence.

“I was overly cocky. I thought ‘we’re great and clients are lucky to have us',” Droga said.

He was brought back to reality when a beverage giant called the agency in for a meeting. Droga said he “tap danced his heart out” for who he thought was the CMO, but were actually two interns.

He realised, despite his best efforts, Droga5 didn't stand a chance at winning the account.

“No matter how good you think you’re are, it doesn’t count for anything and it was one of those deflating, magic moments where we had learnt you have to earn every meeting and you can’t trade off reputation,” he said.

“It’s easy in our industry to get seduced by your own hype and I appreciate the goodwill, momentum and hype around our agency. But I say to people in our office ‘you can enjoy the hype but you don’t believe the hype’."

Droga revealed the agency faced an identity crisis in its fifth year and found itself "shapeshifting" to suit certain clients.

"Everytime we've tried to pretend we are something we’re not, it's never worked," he said.

"I think that's what happens when you see agencies do great work on certain clients and then just do mediocre work for other clients. A lot of the time it's not the client, it's the agency thinking that's what's needed."

Droga also subtly addressed the exit of Droga5 chief creative officer Ted Royer. The reasons for Royer's departure were never revealed, but the agency did confirm it was investigating complaints against the creative.

“For the first time our culture was challenged this year,” Droga said.

“I used to have the belief that great work covers all cracks. This year, when we had our swirl. I assumed our culture of standing for something and empathy was bulletproof and would always be there but you realise you can’t assume what you believe will trickle down.”

In September 2015 Droga announced that Droga Sydney was closing, saying at the time he saw little value in operating in a market where the agency didn't represent the Droga5 brand.

AdNews will be bringing you all the biggest stories from Cannes Lions for the entire week. Don't miss out - subscribe to our newsletter.