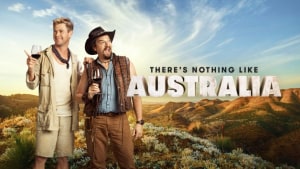 Tourism Australia has unveiled its Dundee Returns Super Bowl ad after several weeks of teasers that have whipped up attention here, and overseas.

The tourism body got everyone talking with a series of trailers for a faux reboot of the Crocodile Dundee franchise called Dundee: The Son of a Legend Returns Home.

The 60-second Super Bowl ad, which aired in the ad break closest to half time just moments ago, was created by Droga5 New York to kick start the tourism body’s three-year push in the US.

It marks the biggest campaign Tourism Australia has run in the US since Paul Hogan’s 1980s Come Say G’Day campaign. It’s also the largest single investment the body has made in a single overseas tourism market.

Read the exclusive AdNews interview with Tourism Australia CEO Lisa Ronson: How an Aussie brand made one of the biggest Super Bowl spots of 2018.

The ad itself stars US Hollywood actor Danny McBride and Aussie heartthrob Chris Hemsworth, as well a a cameo from Paul Hogan himself.

In it, McBride recreates several iconic scenes from the original Dundee movies, and takes in a few of Australia’s top destinations, accompanied by Hemsworth. Towards the end, McBride catches on and realises it's not a movie at all, it's a tourism ad for Australia.

Once the jig is up, the ad proceeds more like a traditional tourism ad, highlighting what Australia has to offer and some deals from Qantas.

While Clemenger BBDO Sydney is Tourism Australia's agency of record, AdNews understands Droga5 won three way shoot-out against R/GA and BBDO in a closed US pitch held back in 2017.

Tourism Australia managing director John O’Sullivan says the promotional power of the Crocodile Dundee franchise today is as a strong as when the original movie was released in 1986.

“The film helped shape their view of Australia, showing them our country's natural beauty and Australians’ friendly and welcoming nature. And it remains relevant today, with our research showing that Mick ‘Crocodile’ Dundee is still a character Americans believe warmly represents the Australian way of life,” he says.

Chris Hemsworth, Tourism Australia's global tourism ambassador, says: "Crocodile Dundee and Hoges did an outstanding job 30-odd years ago of captivating American audiences and putting Australia onto their travel wish lists. I'd like to think the inspiration the film has provided for this new Tourism Australia campaign will ultimately translate into similar success."

Qantas is one of 20 commercial partners Tourism Australia has worked with to make sure the campaign gets American travellers’ attention, and also converts them into visitors.

Qantas Group CEO, Alan Joyce, says: “For our customers their experience of Australia begins the moment they step into our lounges and on-board where, we showcase the best local food, wine and hospitality. Qantas offers more flights between the US and Australia than any other airline and we’ve been doing it for more than 60 years. We look forward to helping more Americans experience all that our beautiful country has to offer and showing just how easy it is to get here.”

The ad was filmed on location in these Australian destinations: