David Droga says advertising must step up in uncertain times 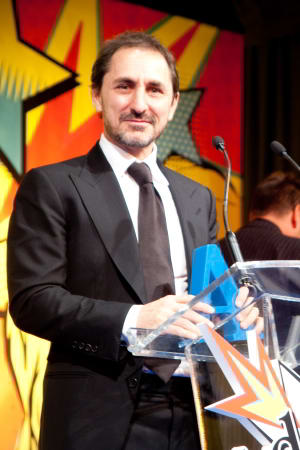 Advertising legend David Droga entered the AdNews Advertising Hall of Fame last night urging the industry to “be relevant again”. He also warned the whipper snappers that there was still plenty of life left in the old drog.

Not that he's exactly geriatric. But Droga has already achieved more than many could achieve in 10 lifetimes, as Lachlan Murdoch told a packed venue.

Starting out in the mail room of Grey Advertising, Droga moved to OMON, becoming creative director at 22 years old. He was regional creative director at Saatchi Asia at 26, and was running Saatchi's head office in London at 29. Then he became worldwide chief creative officer of entire Publicis network at just 33 years old.

“Around this time I had lunch with him in New York,” Murdoch said. “He told me of his vision ... to do something truly transformative and entrepreneurial. At the time I thought he was totally nuts.”

Yet since founding Droga5 in 2006, the firm has landed multiple Cannes Titanium awards and been named agency of the year in the US four times in six years by the trade press.

“He is the single most awarded creative in the entire history of the Cannes creative festival, with over 80 Lions, seven Grand Prix and four Titaniums. He has been named in Esquire's best and brightest list three times, and global Australian of the year,” Murdoch said. “And he is the youngest person ever inducted into the New York Art Directors Club Hall of Fame, joining Walt Disney, Andy Warhol and David Ogilvy.”

What is more, some of Droga's work has been made into case studies for the Havard Business School, and some sits in the permanent collection of the Museum of Contemporary Art in New York.

Not bad for a “scrappy 18-year-old” who started out with no degree but hit the ground running, Droga acknowledged.

“I had enough confidence to believe I could be spectacular, enough insecurity to work my arse off just in case I didn't have enough talent – and no plan B. So I had to make it work,” Droga said. “And that is the beauty of this industry. It is a privilege to be paid to have an imagination."

Not that life in advertising is a picnic. “It's tough. We get our arses kicked all year round and it doesn't get any easier. But we still get paid to be daydreamers and problem solvers."

For Droga, that's not going to change anytime soon. "There a good few years left in me before I come asking the whipper snappers for a job."

Uncertain times, the “fragility, the nervousness” around the world are an opportunity, he said. “It is our time again because the onus is back on us to innovate, to be relevant again. Technology is not an answer, it is just platforms. We can do extraordinary things. It doesn't matter what country you are in or the budgets you have. Everything is an opportunity to do something great.

"[Advertising is not] just about flogging stuff. We can build industry, popular culture, contribute to social good. It's our responsibility to do more with what we have. And if we don't, then shame on us, because we sit at the intersection of everything.”