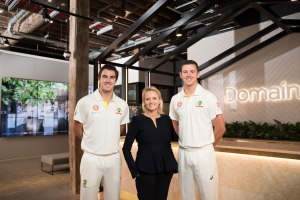 Domain and Cricket Australia have entered a four-year 'platinum partnership' which will give the digital real estate platform presenting, online and naming rights across a variety of the game's assets.

Under the deal, Domain will be the presenting partner of men’s Test cricket over four years, which includes the next Ashes to be hosted in Australia, and will become the official real estate partner of Cricket Australia

On top of the presenting partner arrangement, Domain will act as Cricket Australia's official online 'live scoreboard' partner, for both the desktop site and mobile app.

The partnership also involves a 12-month rolling program of social media, content and app integrations across the Cricket Australia platforms.

Cricket Australia has continued to hunt for new sponsors, following the exodus of brands that cut ties from the game after the high-profile ball-tampering scandal earlier this year.

"Cricket Australia have been incredibly transparent with us as we have worked through components of the partnership," Domain chief editorial and marketing officer Melina Cruickshank says.

"Fundamentally, we believe in the resilience, endurance and spirit of cricket. We see this as a true partnership and look forward to being a part of the fresh era."

Cricket Australia CEO James Sutherland says the organisation is "grateful" for the significant investment from Domain.

"We are excited to welcome Domain as a new partner of Cricket Australia and as naming rights sponsor of our men’s Test series," he says.

“Through this multi-year deal, Domain has made a significant commitment to cricket in Australia."

For Domain, this is an opportunity to positively boost its public profile, following the news CEO Antony Catalano exited the company just three months after the real estate business listed on the ASX.