Domain valued at $2.2 billion after listing on ASX 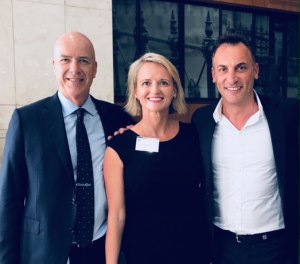 Greg Hywood, Melina Cruickshank and Antony Catalano at the ASX when Domain and Fairfax separated

Domain has made its debut on the ASX with a valuation of close to $2.2 billion, with shares opening at $3.80.

Fairfax has lost nearly a third of its share price to 75 cents as the market adjusts to the spin-off of Domain, of which it retains a 60% stake.

The other 40% of Domain will be held by existing Fairfax shareholders who will each receive one Domain share for every 10 Fairfax shares.

Fairfax Media, including its 60% in Domain, is now worth $1.7 billion. Excluding Domain, the rest of Fairfax is valued at around $700 million.

“This is a historic day for Domain and the Fairfax Group,” Catalano said, adding it was a "nerve-racking" experience.

Catalano thanked Hywood for backing his vision for Domain, saying the chief executive was “the only person I know who understands the transactional business that funds this thing called journalism”.

Speaking to AdNews after the event, Catalano says the valuation is a recognition of the real estate business' growth in the last three years.

"We haven't deviated from our strong plan and strategy and the market recognises that. The market sees we have a sustainable future," he says.

Prior to listing, Domain, led by Catalano, went on a worldwide investor roadshow, meeting with more than 90 potential shareholders, only a third of which were existing shareholders, in New York, Boston, London, Hong Kong, New Zealand and Australia.

He says the business is now placed to lead its own future, rather than seeking approval from the Fairfax board.

"For us the major focus is to really consolidate on our investment. We've grown our business to 750 staff which means we are well resourced and positioned to really continue to grow the core parts of the business," he says, adding that the business is also looking to expand into other revenue streams.

He adds that Fairfax will continue to look tap into areas that impact the property journey, such as insurance.

"We aren't set on just being a listings business and we are already much more than that," he says.