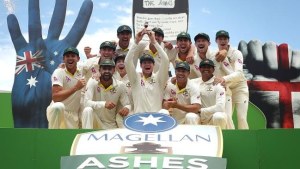 Magellan Financial Group has pulled the plug on its three-year $24 million sponsorship as the naming rights of domestic international cricket amid the ball tampering scandal.

The financial services firm said the decision was based on the cheating scandal not aligning with the businesses core values.

Magellan co-founder and CEO Hamish Douglass said: "A conspiracy by the leadership of the Australian men's test cricket team which broke the rules with a clear intention to gain an unfair advantage during the third test in South Africa goes to the heart of integrity.

"Regrettably, these events are so inconsistent with our vales that we ar left with no option but to terminate our ongoing partnership with Cricket Australia. We were delighted with the recent Magellan Ashes series sponsorship and it is with a heavy heart that we have to end our sponsorship."

The withdrawal of Magellan is the first major sponsor to sever ties with Cricket Australia since the scandal broke last weekend.