Capturing the hearts and minds of Australian women 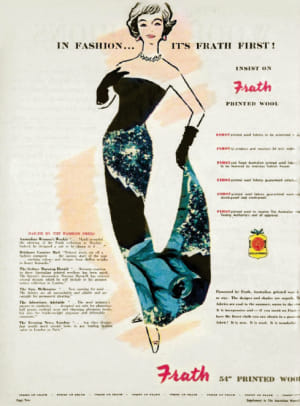 This (Part 5) first appeared in the AdNews March 2019 magazine as part of a six-month project with Lida, looking at Bauer's Women's Weekly. Support AdNews by subscribing here.

Innumerable brands and categories have vied for the attention of Australian women via The Weekly since 1933. Here, we can categorically say which ones won the race.

The Most Frequent Category Advertisers 1933-now

Face and body care, food and drink: the mainstays of advertising in The Weekly. Some things it would appear, don’t change. However, the journey of these categories over the lifetime of the publication tells us a huge amount about the relationship between Australian advertisers and women.

For example, from a relatively high point in the 30s and 40s, face and body care adverts went into decline until the 1980s when a massive upward trajectory led it to become the leading category of our times.

There is a conversation to be had here: have women successfully shunned objectification, or are we still very much subject to it? The data tells us that the dominance of this category in The Weekly and therefore womanhood demands more consideration.

Meanwhile, food and drink as a category fared well until the beginning of the 2000s before dropping away to its 30s/40s levels.

Now, this may tell us something about where those FMCG brands are spending their ad dollars – and no doubt the drop is fuelled by a switch to online – but nonetheless the decline, in these times of food obsession – is fascinating. 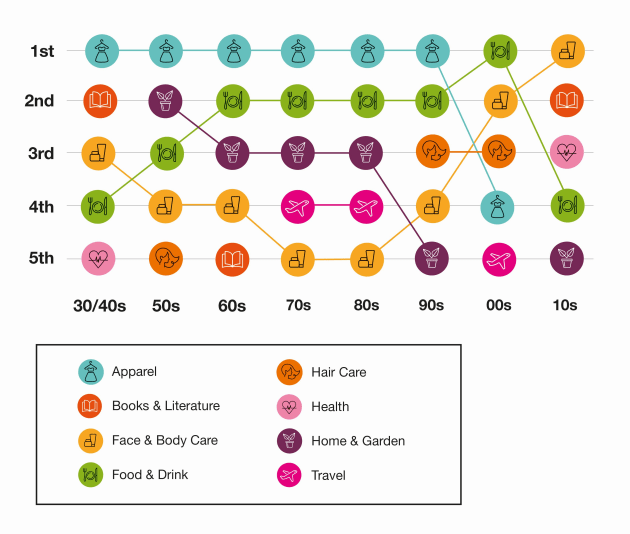 Elsewhere, we see a fall in the home and garden category from highs in the 50s to a slump in the 90s where it continues to remain; hardly surprising given the rise of women’s growing focus outside the home.

Where women’s concentration has shifted for particular consumer goods is no better evidenced than the apparel category. By far the dominant player across every decade until the early 90s, the slump and disappearance of fashion adverts as the internet arrived is telling.

Print pages gave way to online, where the aspirational dress could be purchased with a click. Again, this points to how women have adapted their habits and taken advantage of the changing times.

The current picture – which is at virtual odds with the all of the other decades – highlights a woman who is pursued by the following categories: face and body, food and drink, home and garden, but far more interestingly, literature (for the first time ever) and health, which makes an appearance since the 1950s for the first time. The concept of self-actualization is most definitely at play.

The Most Frequent Brand Advertisers 1933-now

Woolworths have been the most consistent advertisers in The Weekly; perhaps unsuprising as it continues to pursue the purse strings held by women even today.

We found it telling that Palmolive and Mortein were the dominant advertisers of the 30s, 40s, 50s and 60s as it reveals something telling about the needs of women at the time, driven by a desire for cleanliness, keeping a home free of bugs – something essential in Australia – and maintaining a healthy environment.

Let’s not forget what a hard task this was before our lives were made easier by the affordability and availability of vacuums, dishwashers and the like.

We noted an interesting shift too between the 60s and 70s, where several companies who had been firm advertisers from the 30s to 60s – Colgate, Kellogg’s, Mortein and Palmolive – reduced their commitment (probably switching their ad spend to the rising medium that was TV) and were replaced by a swathe of new brands: Myer, Qantas and Revlon. 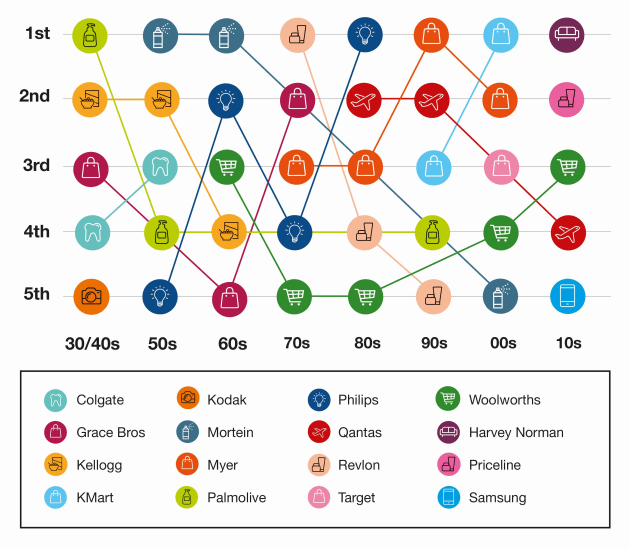 We found the Revlon appearance – usurping Mortein as the most frequent advertiser – very reflective of what was happening in womanhood, as well as the arrival of Qantas as international travel became an affordable luxury for Aussie women and their families.

We also see shifts at the end of the 90s and again at the end of the 2000s, no doubt driven by the rise of online publishing. The brands who advertised most frequently in both decades were KMart and Myer – interesting therefore that Target makes a one-off appearance in this list in the 2000s as it clearly stepped up budget to compete with the other big stores.

And as this decade comes to a close, the players who have found a home in The Weekly are new: Harvey Norman, Priceline and Samsung. Harvey Norman – currently Australia’s biggest advertiser – represents the boom in home and property, while Priceline and Samsung are brands of our-time: proving beauty, wellbeing and tech are now central components of an Australian woman’s life.

See Part 6: The evolution of the dress in advertising