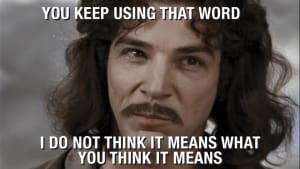 From last year's buzzword belters of strativity, adgorithyms and cord-cutting agnosticness, the dark side has gotten darker and is pushing the already ragged boundaries of the English language.

We fess up to enjoying the randomness of Uber’s unique, less than formulaic, marketing activations (did someone say kittens? Delivered?), but ‘uberisation’ is much more than that, and everyone wants a piece of it. The fastest growing taxi firm in the world owns no cars, and it’s turning the norm upside down, spinning traditional on its head and shaking it up for good measure. Take the startup attitude, with the consumer at heart (pissing off people in between), and you are half-way to uberisation. Shake those branches.

Where there are stitches there are scars. Scars of a war-torn adscape covered in adblocking scabs and quick-fix bandages – until now. Adblocking’s long-lost sister has arrived. Enter ad-stitching, a server-side ad insertion used as a workaround for adblocking, by building ads into content on the back end rather than on the browser side. Get familiar.

Meet marketing desilofication. We imagine it has something to do with breaking down barriers between existing processes, a noble goal for any organisation looking for effectiveness and smoother processes, but adding yet another term to talk about it surely adds to the problem. You could use the word, or you could just get on with the process.

New century marketing and ad tech developments are fucking marketers up, left, right and centre. Ask the Lumascape boffins trying to cram in a barrage of logos into that ever-shrinking, hideously colourful and complex diagram. It’s mad. The ecosystem is frenzied and the over-paid programmatic, monetisatsion gurus living and breathing all things marketing advertising technology are equally stirring.

More like snoozenostic – lest we forget 2014 was crammed full of enough ‘nostics’ in the form of agnosticness, but really – it’s back. Ah screenostic. Yes media networks, brands and agencies - we get that you finally get it and (some of) you are creating content for different size screens, but quit telling us how this is your BIG focus and just do it already.

Haven’t got your head around how to target a millennial yet? That evermore elusive demographic that will be the most powerful spending group on the planet any day now is already being superseded by another group of even more elusive, and difficult to reach super-consumers. Those kids born at the turn of the century are centennials. And they are terrifying. Be afraid marketers.

The 21st century, a time when technology and society are evolving faster than many organisations’ ability to adapt. It’s no longer the strongest of the species that survives, nor those with the most smarts, but the ones most adaptable to change. This concept could be enough to send Darwin packing, back to the Galapagos Islands, iPad under arm, for a quiet Google.

Yes it is a thing – which is cropping up far more – just ask the marketing cloud folk. In case you haven’t already taken a gamble at what this linguistic blend of words means, it is indeed a portmanteau that combines marketing and architechture. In simple terms, it’s the electronic architecture of a marketer’s ad tech stack. Obviously.

Is it native content? Or simply a brand doing an ad? Honestly we don’t really know what brandvertising means. Much like how the written word has now become ‘content’, maybe the humble word ‘advertising’ is no longer enough. We know that some agencies are already using the word to describe what they do though, so it must mean something. The end, or the beginning, is nigh.

Let’s get phygital, phygital... said no one, ever. Because phygital is an awful, non-word that sounds somewhere between an Olivia Newton John song or a venereal disease, depending on pronunciation. Apparently it’s the blending of the physical and digital worlds in building a consumer experience but we believe there’s already a word for that. It’s called “marketing”.