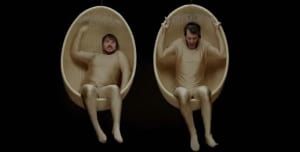 Aussie ads, with their unique take on life, make us laugh out loud, silently gasp, and feel everything in between. This is our pick of the Ten most influential Aussie-made ads of the year - see if you agree with us.

“Brace for impact” is not just a line from one of the funniest collections of ads to do the rounds this year, but indeed, Bonds had to brace for impact because this spot totally hit home, and into the bosom of (well most, we presume) Aussies. This is an exmple of truly great copywriting and the series of ads is laugh out loud funny. The trials and tribulations of this pair of gold-lycra-clad testicle men suspended in hanging chairs is so out of the box, it’s brilliant. Just the right balance of creepy, quirky and clever, they are weirdly compelling companions. Watching two testicles personified, making exchanges with ‘the brain’ proved to be a simple, but extraordinarily ballsy approach (sorry) to selling pants.

What’s not to like about a talking dog, surreal visions of men in combat gear and a car chase? Ticks all the boxes and has a top class soundtrack to boot. Honda released a 15-second version of this advert without even featuring the car; so sure was it that it had struck a winning formula.

Nothing short of stunning, this collection of three spots doesn’t showcase the uni itself, but amplifies the extraordinary talents of its students – some of whom have had tough starts in life. The ads are beautifully shot and story-boarded with precision. Truly inspirational and gamechanging for the category.

Quite possibly one of the most harrowing ads to hit our screens this year, this campaign showed Australian actor David Field acting out the death of a whale which is caught and dragged towards its captors. The reality of whaling is a painful truth, and one that more Aussies, thanks to this, will be aware of.

Quite possibly the most expensive ad to air on Australian TV this year. The Kanye track alone would have cost a pretty penny and the line-up of talent including Goodes, Gomes, Rogers et al wouldn’t have been cheap either. This spot oozes glamour and pits DJs way ahead of its rival.

6. 'Australia Day' - Meat and Livestock Australia by The Monkeys

Made all the more poignant by the loss of Richie Benaud, this spot enlisted the help of past and present iconic Aussies all coming together to eat a lamb-filled BBQ on Australia Day. This gathering would see Benaud rubbing shoulders with Captain Cook and Ned Kelly.

There is probably no-one who hasn’t seen this run of ads for Optus and Netflix. Ricky Gervais gives a star turn, playing his usual deadpan, irreverent self. Optus meanwhile paid the greater share of Netflix’s Aussie launch by striking up this bundle deal.

Mixing elements of Evel Knievel, The Karate Kid and the Beastie Boys’ Sabotage video was the ideal mash-up to turn what is essentially boring subject matter (insurance) into a big brand idea that’s also entertaining and amusing. Captain Risky has earned himself a place in the hearts of Aussies.

Tapping into universal feelings of hope and delight, this spot saw kids playing out the realities of their career ambitions: performing surgery on a teddy, playing at being a magazine editor all to the tune of Bugsy Malone. But rather than being schmaltzy, it was genuinely touching.

McDonald’s made the cut for its irreverent tone and top notch copywriting. Backing the launch of its loaded fries with a detective movie spoof and a series of clips giving weird persona’s to fries. With lines like ‘I told you I was going to wear baconface cheese pants’, how could it not be one of the best ads of the year?

The Influential Top Tens from The Annaul were presented in partnership with The Newspaper Works.