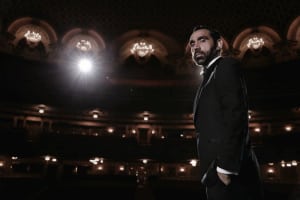 A blend of creativity and diversity has seen David Jones launch its ‘It’s In You’ campaign with Adam Goodes as a new brand ambassador.

Goodes, Australian of the Year 2014, retired from AFL after the semi-final on 19 September. He becomes the retailer's sixth ambassador with the dual role of advising on its Reconciliation Action Plan (RAP).

The brand film by Whybin TBWA was shot in and around Sydney and is set to Kanye West's 2010 track Power. The 100% digital campaign also features seven 15 second films and a behind the scenes video.

Following on from the #Shotbysound campaign featuring Daniel Johns and Bold New Season, ‘It’s In You’ aims at, but isn't restricted to the younger market, which covers the 18-25 and 25-34 segments and is the fastest-growing demographic, according to David Jones chief marketing officer, David Robinson.

“That younger market is important for DJs and the demographic that we over-index in against the Australian population,” Robinson said.

Paul Bradbury CEO Whybin\TBWA stressed the campaign has a “universal insight” and isn't exclusively for a younger demographic.

“#Itsinyou is a continuation of the strategy over the last 12 months to reinvigorate the David Jones brand and to ensure it's relevance for 18-34 year fashion forward shoppers.

Following on from #shotbysound, this campaign is about inspiring the potential that resides inside everyone.”

Bradbury said the agency drew on feedback from customers that “clothing or make-up can empower them to face their challenges head on, and enable them to be whoever they need to be at any given time.”

On a broader level, David Jones chose Goodes for his work with the community and particularly in indigenous education through his GO Foundation.

“It was a natural fit with him in terms of some of the work that we want to do around community environment, ethical sourcing and diversity. He is very passionate about education, for example, and that is something that has come up in our research,” Robinson said.

While it is still early days, Robinson says the campaign has resonated with customers and the cut-through has been fantastic since the October 18 launch.