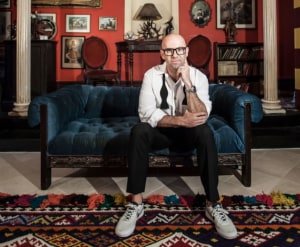 Adam Ballesty has also featured in The AdNews Annual

Speaking to AdNews about the company's latest $15 million Johnnie Walker campaign, Ballesty emphasised the strength of not only Walker but its entire portfolio, which includes brands such as Bundaberg, Smirnoff and Gordon's.

“That's actually not true. Alcohol is growing, spirits are a huge contributor to the growth and we are having a fantastic time. Five or six years ago that number had begun to turn and it wasn't that sort of way.

“Australians can be seen as drinking less but drinking better but at the moment spirits consumption is increasing.

“We've had fantastic success in that RTD, that casual get together late afternoon sort of consumption at the moment.

“Also the long term consumption has been in decline but in the last year or so we have seen an uptick in consumption (past 4 weeks trends) driven by spirits and specifically RTD – Lazy bear and Pure being the driver."

Ballesty says that the brand has now opted to shift its outlook from a 'lens of luxury' and instead take a 'craft' approach to its positioning.

Highlighting the success of the company's recent Bundaberg Rum repositioning as a key measure of Diageo's strength in the market, he says the brand has had a complete turnaround since launching the campaign two years ago.

The campaign was noted for having the iconic rum brand “go back to its roots.”

“When my team sat down and looked at all the consumer research and had a look at the brand from the bottom up, every key metric for that brand was red.

“That's from brand to sales performance. I'm very proud to say that all the key metrics are now green.

“It has been an outstanding result and one that would be on the top of my resume in terms of things I'm most proud of achieving in my marketing career.”

However, not all would agree with Ballesty when it comes to the return of 'boozing it up'. A report released last year by Drinkwise detailed the decline of Aussie drinking habits over a ten year period.

A further 9% drop was recorded in the number of Australians drinking daily and 47% less are drinking weekly.

Despite reports, Ballesty says the market is “ripe” for the new approach Diageo is taking to its portfolio of spirit brands.

In the case of Johnnie Walker, research conducted by the company revealed that many consumers are less interested in celebrity appeal and glitz and glamour once associated with Scotch.

“The story was ripe to be told differently, hence why we didn't use celebrity, there is no 'bling' in the add, there are no private jets.

“Celebrity and their success is always a shortcut to tell a story that because a person can equate that success and that outcome to progress. Yet what we are demonstrating now is that it is not the outcome but the journey."

However, Ballesty does not believe the overall abandonment of celebrity is necessary but believes the best option for the brand is not to use the 'shortcut' of a celebrity's status.