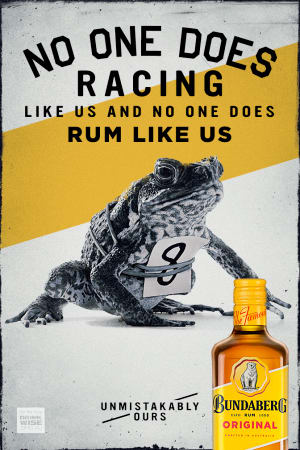 Diageo is investing $20 million over the next 18 months to revive its Bundaberg rum brand and instill it with national Aussie pride.

It is introducing a new brand strapline 'Unmistakably Ours' which forms the basis of a five year purpose-led brand platform to grow the brand, along with a 90-second TV ad and a host of digital work.

It marks the first major campaign in a decade and the first time Diageo has really delved into what the brand stands for, and what it means to be an Australian brand.

The 90-second launch ad will roll out tonight (2 March) during the kick off of the NRL season and features Underbelly actor Gyton Grantley, Olympic medallist Anna Meares and surfer Julian Wilson, who famously paddled toward Mick Fanning to help him during a shark attack.

The ad features a Mardi Gras scene which aims to capture the “spirit of optimism and positivity” the brand has in association with Australian pride.

Diageo says recent research shows Australian pride has dipped to its lowest point in 20 years, and as such, wants to play a part in reviving it.

It's fair to note that it feels similar in tone to the recent Meat & Livestock Australia ads which have a strong message of diversity and Australian pride through the Spring Lamb and January campaigns.

Jodi McLeod, Bundaberg marketing manager who used to work with MLA's marketing boss Andrew Howie, tells AdNews the Bundy brand is happy to be in the same company as MLA.

“MLA is good company to be in, and its recent ad talks to Australian values, it's not just what's going on in Australia, it's what's going on globally. McLeod says brands feel the need to reassert a positive intent around what it means to have pride in where you live and unite people behind that in a world that is getting so divisive. It feels like optimism and bringing people together is really important."

“For us, we wanted to take it there rather than focusing on challenges or controversy so we looked at what binds us together. It's not surprising to me that there are a number of brands playing in this space. It seems like consumers want a reason to feel good about where they are from and given what's going on in America I think that's a fair sentiment.”

Diageo is hoping to reach a broader audience that traditionally associated with Bundaberg as well as spreading its reach beyond the borders of Queensland. While Queensland is the drink's heartland and it is seen as an Australian brand, Diageo wants to emphasise that Bundy is an Australian icon.

“There's no reason why it shouldn't be on the same pedestal as Vegemite as an Australian icon,” says McLeod.

It's also the first time Bundy has worked with celebrities in its advertising but says that each of the famous faces in the ad is a genuine Bundy drinker, and that “authenticity” was important as it didn't want to use “celebrities for celebrity's sake”.

Bundaberg sales, like most other dark spirits, have been in decline in recent years since the ready-to-drink category was hit with a new tax regime. The new purpose-led platform, as well as product innovations like the Lazy Bear bottled RTD, are designed to reverse that decline by keeping Bundy in line with current consumer behaviour trends.

The $20m spend will be heavily skewed towards TV, with online video and out-of-home also playing a significant role. Because alcohol brands are heavily regulated in some states in the OOH space, where it's prevented from running Bundy ads, Diageo is instead running Drinkwise responsible drinking ads.

“TV is still a significant spend for us and plays an important role, particularly when there is an emotional message to get across,” says McLeod.

Later this year Bundaberg will also be working closely with a number of large Australian cultural events, but McLeod declined to comment further on what that might entail.

Diageo worked with Leo Burnett Sydney and Mediavest on the campaign.

Check out the TVC below: