'Operating at the mercy of its bank'; Media Watch questions if Ten can survive 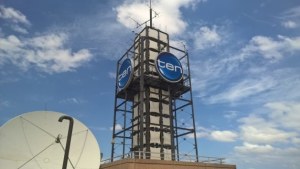 Last night’s Media Watch called into question the future of Channel Ten as it continues to shed viewers, advertising revenue and its market value tanks.

Addressing Ten’s most recent results, which saw the company post a $2.4 million earnings loss in the first half of FY17, host Paul Barry speculated what’s next for the network, including a rumoured buyout from News Corp.

“Both the bank and the benefactors have to be repaid in December and Ten does not have the $100 million or more that it will owe them by then. So what will happen?

“Even with more cost cuts and a reduction in government licence fees, which Ten is hoping for, the network may not survive.”

Industry analyst Peter Cox believes one of Ten’s billionaire benefactors, Lachlan Murdoch, may end up controlling the network. However, that solution needs a change in media ownership to allow News Corp to swoop.

“News Corp would want to take this over. They can put their Sky News into Channel Ten and get economies there. They’re already supplying Fox product into the network so that would suit them, and they would think they could run this network more successfully in the future,” Cox says.

Another option for Ten would be to rise again as a smaller, “less ambitious” beast as the News Corp deal may not happen in time to save Ten.

“I think personally that the best result would be put it into receivership, restructure the company, restructure their program deals with the studios and then try and make a viable business out of a more niche free-to-air channel,” Cox adds.

Mediawatch also took a swipe at Ten’s 2017 programing slate, including the dismal relaunch of The Biggest Loser and the upcoming season of The Bachelorette, which Barry suggests has passed its peak.

The Bachelorette season two's debut episode last year pulled in an audience of 655,000 metro viewers. In contrast, 875,000 fans watched the first episode of the 2015 Bachelorette with Sam Frost as the focus. Just last month the Biggest Loser was dropped from prime time after metro ratings fell below 300,000 on the scales.

“Those Ten hit shows aren’t as popular as you might think. In fact, Gogglebox has been the highest rating among them this year, and the only one competitive in its timeslot,” Barry says.

“Meanwhile, the Biggest Loser, one of Ten’s so-called tent-pole franchises that are supposed to hold up the network, has been a disaster, and another, The Bachelor, has been shedding viewers.”

Barry finished the segment by saying that TV today is a tough business and that Ten’s shares are now worth "a hundredth of what they were 10 years ago".

Mediawatch airs on ABC, which is a competitor of Ten.