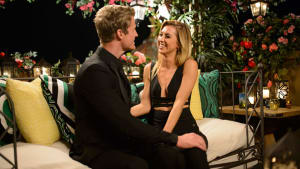 Last night Alex made another move on Richie

The competition for Australia’s eyeballs is in full swing, with Ten’s The Bachelor beating out Seven’s Zumbo’s Just Desserts in the 7:30pm slot last night.

The Bachelor saw a 2% increase in audience since last week’s Wednesday night episode, with 853,000 fans tuning in to see Richie send home the remaining brunettes.

The hit reality show topped Zumbo’s Just Desserts in the entertainment category. The sugary show's audience continues to fall, now at 734,000, down from its debut of 1.08 million metro viewers.

ABC's Gruen, which begins at 8:30pm, was the most watched entertainment program of the night, hitting an audience high of 927,000.

Agencies Welbourn O'Brien and Bondi Advertising were tasked with creating campaigns to bring civility back to the internet for popular segment The Pitch. Welbourn O'Brien took home the trophy for its serious take on the issue.

On Twitter, The Bachelor continues to dominate chatter, and the Twitterati were quick to call out another “subtle” product placement on the show, when Extra Gum appeared on the screen.

AdNews ran its own poll to see what our Twitter followers were watching last night, with a 48% majority saying they watched Gruen. Just over a third (36%) said they were watching The Bachelor and 16% tuned in to Zumbo.