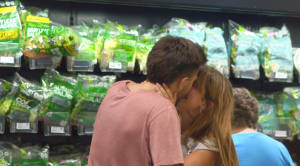 Celebrate Valentine's Day with whoever you love

Woolworths and its creative agency M&C Saatchi have gone for the heartstrings in this latest Valentine's Day campaign.

A 90-second YouTube clip has been released on Woolworths' social channels where hidden cameras are used to film customers listening to a surprise pre-recorded message from their loved ones. It features mothers and daughters, partners, best friends and Woolworths' staff.

The social led campaign officially launched on Sunday and will also run radio and out of home using the tagline 'celebrate Valentine's Day with whoever you love'.

Andrew Hicks, director of marketing at Woolworths, says: “At Woolworths we serve a big and diverse group of customers across Australia and we wanted to reflect this diversity in our celebration of love this Valentine’s Day”.

It is the first Valentine's Day themed campaign from Woolworths since swapping to M&C Saatchi from Leo Burnett roughly a year ago. The first major campaign from the shop for Woolworths was a 60-second spot celebrating the Sunday Roast. Following from that was a Rio Olympic timed campaign titled 'Grown in Australia'.