'We are going to get better' Facebook professes at Adobe Summit 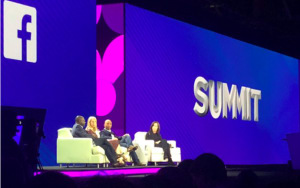 "We're going to get better and are going to listen to the community", says Facebook VP of marketing partnerships Gene Alston.

Speaking on a social media panel to more than 10,000 attendees at the Adobe Summit in Las Vegas, Alston was quick to address the Cambridge Analytica-sized elephant in the room.

His comments follow a 'softball' question from Adobe EVP and CMO Ann Lewnes on what Facebook, and other panellists; Twitter VP and global head of content and partnerships, Kay Madati and LinkedIn VP of brand and communications Melissa Selcher, saw as their company points of differentiation.

Alston, who has been in the role nine months and previously worked at Pinterest for nearly four years, said Facebook's leadership team is in overdrive dealing with the current data issues, that it takes its commitment to users "really seriously" and now vows to do better.

Pressure has been mounting on Facebook since a Cambridge Analytica whistleblower described in detail how it used the social media platform to harvest the profiles of around 50 million users in a campaign to get Donald Trump elected to US president in the 2016.

In addition to building communities and "bringing the world closer together", Alston said it has a key role to make sure it is protecting the privacy of all Facebook users.

"I just want to say, from Mark and the leadership team, we take our commitment really seriously and as Mark said, if we can't protect your info then we don't deserve it and we really mean it," Alston said.

He said a lot of time is being spent on reviewing all apps in the ecosystem and carrying out audits where they find irregularities.

If there is any misuse of personal information, Alston said Facebook is committed to "ensure that data is deleted and that we tell you if you are involved at all".

"There's a whole bunch of things that we are doing on a forward-looking basis," Alston said.

"I have never seen the leadership team more focused and committed to really tackling these challenges head on to make this platform better.

"We're going to get better and we are going to listen to the community."

*AdNews traveled to the Adobe Summit as a guest of Adobe.