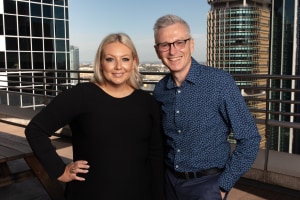 VMLY&R has appointed Lucy Wilson as regional director of human resources ANZ with the objective to engage, grow and retain the best talent across VMLY&R’s Sydney, Melbourne, Brisbane, Auckland and Wellington campuses.

Wilson is charged with bringing to life the agency’s regional people and culture strategy in alignment with the global positioning.

She will report directly to VMLY&R CEO ANZ Jon Bird.

Bird says Wilson’s appointment is a "critical hire" to attract and retain the best talent.

“Lucy is a natural born leader with a phenomenal ability to create and deliver unique people and culture strategies. We are incredibly excited to have her on board and take advantage of her results-focussed mindset and her genuine love for creating meaningful employee experiences," Bird says.

“With our Melbourne office doubling in size in recent months, the internal promotion of several team members plus an active hiring target in place, Lucy has her work cut out for her and she has already hit the ground running."

Wilson will also work closely with VMLY&R’s US-based global executive cirector, human resources, Ronnie Felder who says she is the "best qualified person" for the role.

Wilson has more than 12 years of HR experience in the marketing, adtech and professional services industries.

Prior to Leadbolt, Wilson was a national people and performance manager at Deloitte Australia, working with partners and their people to provide HR and people management solutions in alignment with the Firm’s Talent Strategy.

“I am thrilled to join VMLY&R and be given the opportunity to work alongside such a collaborative leadership team who are genuinely focused on talent and having a meaningful impact on their people," Wilson says.

"My obsession for all things people and culture means my focus will be to deliver the best for VMLY&R’s team and I cannot wait to roll up my sleeves and bring our plans to fruition.”

Robinson was appointed as the agency's first head of experience. At the time, Bird said Robinson's hire was one of a number of senior roles to be announced in the coming months, in line with the regional leadership team's vision of where the business is heading.

Bird was named CEO of VMLY&R in June, relocating back to Sydney for the role after working in the network's US arm since 2014.

Bosilkovski has since been named CEO of Clemenger BBDO Sydney.