Usain Bolt is the new face of Optus

The world's fastest man has replaced one of the funniest as the new face of Optus.

Usain Bolt has struck his first deal with an Australian brand and will promote the telco in a national advertising campaign due to hit screens next month.

The theme of the ads is 'Relentless Improvement', which matches the mindset of the 100m and 200m track star in which mere thousands of a second of improvement can make all the difference.

“It’s no secret that Usain Bolt competes to win. His hard work, fierce determination and unwavering commitment are exuded every time he hits the track,” says Ben White, acting managing director of products and devices. “He is relentless in his pursuit for excellence and it seems only fitting that we would engage with arguably one of the greatest and most renowned athletes in the world today.

“We continue to invest in our network and content offering to bring customers closer to the action and connect them with the best in entertainment and sport. This new partnership marks a significant development in Optus’ journey to become a mobile-led multimedia company.”

Aside from the TV ads, Bolt will feature in out of home, digital and retail advertising across the Optus national store network. AdNews understands all of the creative agencies in Optus' 2015 roster were involved in the development of the campaign.

Fans can also get a behind-the-scenes look at Bolt in the Relentless Series, a documentary style video that will be released through Optus’ online and social media channels in the lead up to the Rio Olympic Games. The TVCs and Relentless Series were filmed in Bolt’s hometown of Kingston, Jamaica. Below is a photo of the filming. 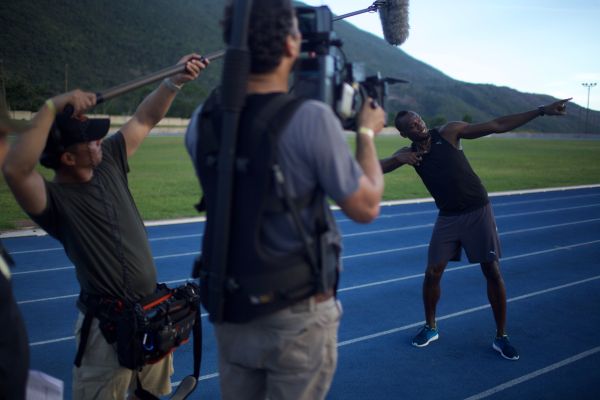 The Bolt partnership is another investment in sport for Optus. Recently, the telco threw its support behind the Australian Olympic team, bought the rights to the English Premier League, entered a three-year partnership with Cricket Australia and became a principal partner of the Melbourne Stars Big Bash League franchise.

In January, UM won the $40 million Optus media account and the telco overhauled its creative roster.

Last year, Optus pulled off an advertising coup with the Ricky Gervais anti-advertising series, a finalist at this year's ACES Awards and among AdNews' top 10 ads of 2015.