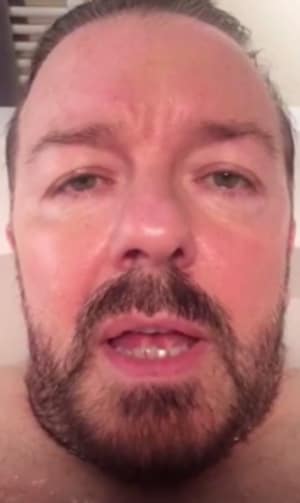 Ricky Gervais took time out of his busy schedule – but not much, apparently - to call Optus “marketing nerds” from his bath tub, in a new “homemade” advertising spot.

Seen only from the chest up and apparently naked in the tub, the deadpan British comedian and The Office creator speaks directly at the camera as he goes into a semi-rebuff of the telco, explaining half-heartedly that his agent had told him Optus “wanted to do another advert.”

“I'm a bit busy at the moment ...I couldn't really plan anything or go into a studio,” he continues, before ending with: “You’re welcome to use this if you want and put something at the end with what you’re advertising, and if you use, uh, same money and, uh, let me know. Alright, sorry about that. Thank you - bye”.

The spot ends with a message to viewers that if they “love entertainment” they can get six months free Netflix through Optus. Uploaded to YouTube on October 31 by the company with the description: “We gave Ricky another call and this is what he gave us this time,” the ad is the latest in a series created for Optus with Gervais by Emotive and M&C Saatchi.

This time around the company is offering customers the chance to get a subscription to the US entertainment streaming service when they sign up to their unlimited broadband and Optus TV starter bundle.

The first ad, uploaded in September 2015, was launched to push the iPhone on Optus' 4G network and saw a typically grim-faced Gervais sitting in a studio speaking about his concerns over how a request from Optus to do a TV ad could result in him undermining his artistic integrity.

Optus declined to speak to AdNews on the pseudo-sleight by Gervais.

What do you make of the new ad? A little too much Gervais in your face? Just the anti-ad you were looking for?

Last time around creatives weighed in on the campaign with mixed reactions. Let us know what you think.