TV beats out online for ROI 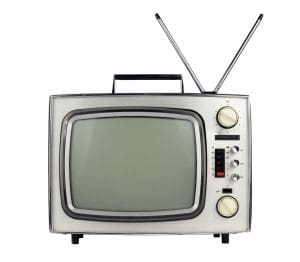 A new report out of the US has suggested despite the mass fragmentation of the video market there, TV remains the number one medium for driving sales. It also found marketers have too-heavily relied on digital.

The report commissioned by US media agency Horizon Media and network Turner Media found that on a spend-for-spend basis, TV remains the best medium for driving key performance indicators such as sales and new accounts.

It beat out paid search, print, or online, and that fact has held fast over the past five years.

The numbers come as Australia's Nine Entertainment Company announced a profit downgrade late on Friday on the back of weaker advertising conditions, with Seven having to reassure its investors on its own guidance after its shares were smashed yesterday following the Nine news.

The profit warning came as several buyers conceded that Ten would invariably grab more share from Nine and Seven in current negotiations, as Ten's growth in the 25-54 demographic swam against the tide of an overall declining audience.

The report found that TV's lift was consistently seven times that of paid search and three times that of online across five key categories. 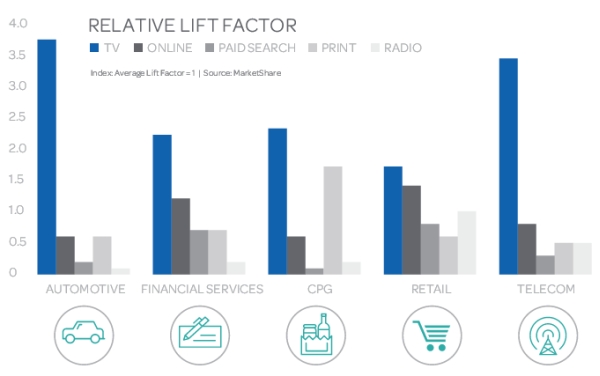 The findings back up sentiment in the media buying industry that TV remains top of the pile for brand consideration.

OMD CEO Peter Horgan told an audience at the recent AdNews Media Summit that there had been a lack of innovation in TV simply because it had been so effective as an advertising tool.

“There is still no other medium that is as effective as filling the top of the funnel for consideration as television for audio visual messaging,” Horgan said.

Slingshot's CEO, Simon Rutherfod, told AdNews this morning said that there had been an over-investment in digital media at the expense of TV, but advertisers were simply responding to where the market was.

“I think there has been an over-investment in digital to a degree, but that investment has happened because that's where the audience is,” Rutherford said.

“I'm not particularly surprised that TV remains the number one for driving that awareness and consideration piece, but the spend in digital I think is being driven by the habits of the people advertisers are trying to reach.”

The report also found that aside from direct return on investment (ROI), TV spots had the ability to influence the path to purchase.

Rutherford agreed that advertisers needed to think more about the interrelation of online and TV campaigns and how they both worked together.

“It certainly has implications on the creative side, and we are starting to see that play out,” Rutherford said.

The report also confirmed what many had suspected, that premium online video inventory from TV networks delivered by far a higher ROI against impression ratio than user-generated or short-form video.

It found that inventory from TV catch up sites and highly-targeted video such as that found on Bloomberg or Major Leeague Baseball drove higher ROI against impression. 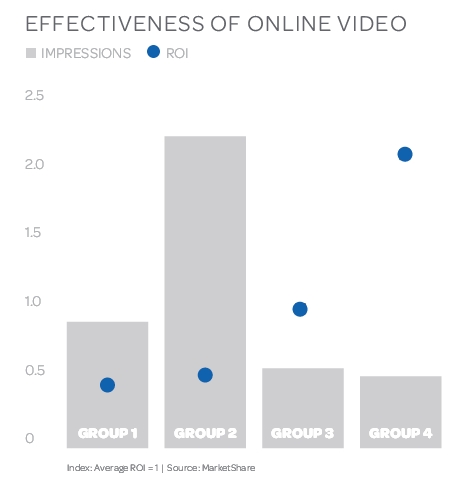