The X Factor launch down as The Block helps Nine win 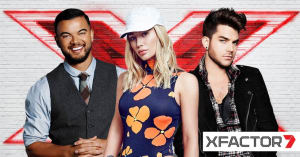 The new judges for this year's X Factor on Seven

Seven’s The X Factor has attracted its lowest audience for a premiere episode, with 904,000 metro viewers tuning in to watch the first episode of season eight. It is the first time the show has fallen below a million viewers for a launch episode and 40% below last year's 1.5 million viewers.

This season welcomes new judges Iggy Azalea and Adam Lambert alongside Guy Sebastian, who joined the show again in 2015.

X Factor was still the second-most watched entertainment program of the night behind Nine’s The Block with 1.069 million viewers, which started at 7pm.

Seven’s new drama series The Secret Daughter, which followed X Factor, attracted an audience of 899,000. It came out in front of the first episode of Nine’s Australian thriller Hyde & Seek in the same timeslot, which achieved a metro audience of 878,000, according to OzTam overnight metro figures.

Ten’s Survivor continues to drop down the top 20 ratings chart, with more shows entering the competitive slot, now with an audience of 684,000 viewers. It came out in front of Have You Been Attention? and Four Corners.