The Optus creative account is out to pitch again 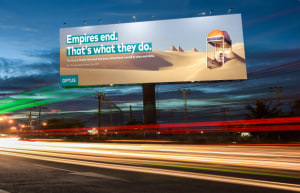 During the roster reveal, it also announced it would work with Bear Meets Eagle on Fire for core projects.

Optus extended its media partnership with UM, estimated to be worth $40 million.

The roster was formed as part of Optus' new process which sees the telco pay agencies for their work during the pitch.

The change followed criticism of how Optus worked with agencies and its fluctating roster.

At the time, Optus chief marketing officer Melissa Hopkins said the new way and format the telco was working with agency partners had given her "great hope" for much-need change in the Australian agency landscape.

Despite the changes though, Optus still received anonymous criticism online for being a "dreadful" client.

Hopkins then told AdNews she was shocked by the negative anonymous comments, which she felt the telco did not deserve following its attempts for a "fairer" process.

In 2018, Optus halved the number of agencies it was working with.

We Are Social, Octogan, With Collective and AKQA - the agencies named in Optus' 2016 roster reveal - were all dropped.