The new era of Mediabrands 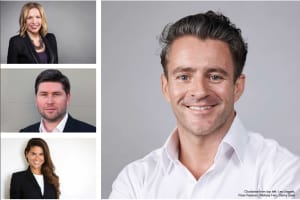 Danny Bass’ defection from GroupM to lead IPG Mediabrands caused big waves a year ago. He’s kept quiet and had his head down for the first six months in the job, but now he talks to Rosie Baker about the future for the group.

When AdNews broke the news last year that Danny Bass was taking on the CEO role at IPG Mediabrands, no one was expecting it. It caused more than waves. It was the first of many hires and promotions that saw newly appointed global

CEO Henry Tajer move a wealth of Aussie talent overseas into global or North American roles. Bass had been in line to take over the reins at GroupM as then chairman and CEO John Steedman [Steady] was preparing to retire. The succession plan for the top job was derailed. Bass was walked out of the building, his laptop and phone retained by GroupM. The seat stayed empty for more than a year at a time when MediaCom particularly was in need of stability. It’s only this month that GroupM’s new CEO Mark Lollback, former CMO for McDonald’s, has taken up the post.

As Bass was on strict gardening leave for six months under close watch and facing the very real threat of legal action if he crossed the threshold even a minute before legally permitted to, IPG too had a vacant corner office. Six months is a long time in media. And it’s a long time to be out of the game.

“The thing that surprised me most was just how much had changed in those six months,” Bass said.

“I arrived back in the middle of TV upfronts and all the networks were talking about programmatic. If you’d have said that at the previous year’s upfronts most people would have thought you were crazy.

So, in a relatively short period of time for that to have happened was an indicator of how quickly things are changing,” he told AdNews in his first major interview.

For such a major switch between holding groups, IPG clearly offered Bass something he didn’t see at GroupM. Even without him directly saying so, the comparisons Bass makes can only be towards his former stomping ground.

The model that Henry Tajer built up over the last five years sees 10 different specialist businesses, each with their own P&L – at the centre are media agencies UM and Initiative. Then there's ad tech unit Cadreon, and Society, the group’s social arm, which launched just under three years ago and now has about 40 people. Search business Reprise has nearer to 50 and IPG also houses a 40-strong data and analysis team within Anomaly. It claims Mnet is the most awarded mobile agency in the world.

The centralisation model is one Bass believes is “unique” and will be “copied” by all the groups in this market before too long. Across those businesses, there’s barely an agency boss that has been in place more than a year, save Lee Leggett at Initiative and Victor Corones at Magna Global.

From the outside, that much change in leadership smacks of instability, but Bass is keen to press that there’s a story of consistency underneath it. Tajer tapped former MediaCom CEO Mark Pejic as CEO and chairman of Melbourne, Ross Raeburn had been parachuted in from Soap into a group role before being named UM CEO, and in the last eight weeks Bass has appointed Melissa Fein from Ten’s Generate division to head up Ensemble, but every other role was filled internally.

“It’s highly unusual to have so many people at the board level that realise we’re stronger if we’re all together; there’s a genuine believe that we’re all here for the greater good,” Bass explained.

“What’s overlooked is the succession planning. Every leader had been groomed to fill the role. That’s a reflection of investment in people.”

Danny Bass is speaking at the AdNews Media Summit. Have you got your tickets yet?

It’s interesting also that neither Leggett, who has 20 years in creative agencies behind her, nor Raeburn who has spent 10 years in digital creative shops, had any prior experience in media.

In recent weeks, Bass has been presenting back to the group what he sees being done well and what needs to be looked at and what it needs to stop doing. Culture and momentum are things the group has in spades, but what Bass sees as an area for improvement is getting those businesses to work better together and under– standing the purpose of each, particularly as the group grows. Nationally there are 669 staff. It’s currently expanding beyond its space in Sydney and taking floors in the nextdoor building and moving offices in Melbourne.

But what Bass thinks IPG needs to stop doing, is giving away its IP and thinking for free. And it’s not just Mediabrands he’s talking about.

“I can only talk for Mediabrands but I’m confident I can reflect this for the industry. There has to come a time when it stops,” Bass said.

“The professional services and some of the tech companies, they don’t do it. They are masters of charging for the work they do because that’s how they’ve built their businesses … they know a fight to the bottom doesn’t help anyone.

“We, as an industry, forgot about that … We’ve got to learn to say no and put a value on what we do. If you can’t make money on a piece of business it’s very foolish to take it on, and advertisers should want profitable partners, not ones that can’t afford to invest in people or innovation or technology.”

Also on the agenda is broadening the relationships that IPG’s agencies have with clients beyond the CMO and into the board level where professional services have been playing. Partly it comes down to training people to have those conversations better, to be able to say no and be confident in telling clients what’s in and out of scope.

“Over the last 10 to 15 years the media industry has not invested enough time and money in the training and development of its people. I think sometimes we’re sending people into a gun fight with knives,” he warned.

In a media landscape fraught with tension and fragmentation, Bass believes the direct reporting chain up to the global CEO (Tajer) gives IPG Mediabrands a strength and adaptability in this market that the other networks don’t have.

“We’re still a young business and we aren’t hampered by legacy issues or regional and global factors that can slow you down. We have almost no regional hierarchy,” he explained.

“I would think I’m the only Australian holding group CEO that reports into the global CEO. That gives us a massive advantage. We can make decisions very quickly, and that just doesn’t happen in other groups.

“What I inherited is a business that is fluid and adapt to the changes that we see coming. It would be foolish to think that the way we do business today is the way we will do it in three years.”

If six months is a long time, three years is almost a lifetime and the industry will be very different again by then. While Bass wouldn’t be drawn on live media pitches in the market currently, Tourism Australia's is more technical than most and an indication of the direction things are going.

Technology is a space in which Bass believes his group is well placed. On a global level IPG is invest– ing in a tech stack he said will be “unrivalled” by any other group. He also believes the role agencies play as an independent advisor on media will extend to the tech space. With hundreds of tech vendors all vying for clients’ attention, an advisor will be critical to guiding investment.

To go full circle on how and why Bass found himself in the Surry Hills-based IPG Mediabrands office instead of over the bridge at GroupM’s Sydney HQ, it comes back to the global strategy Tajer is putting in place.

“I have the utmost respect for GroupM. Steady [John Steedman] gave me my start in media agencies, but I felt passionate about the model Henry had started here and the plans for the global network,” he revealed.

“There’s very few chances in your career where you can be part of something new. There’s an entrepreneurial and, dare I say it, startup mentality here that permeates the business and I wanted to be part of it.

“I’m not [planning on] going to America; we’ve outlined a three-year plan to the board, but where we’ll all be in five years is very, very difficult to say. We’re trying to future–proof the business for the changes that come along.

“If you’d asked me 16 months ago would I be sat here in Henry Tajer’s old office as the CEO of Mediabrands, I would have said no. Will I be in New York in five years? I’ve got no idea, but we’ve got an enormous job to do here and we’re going to see it through.”