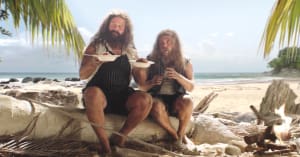 After a run of successful and ground breaking campaigns for Meat and Livestock Australia's Lamb business, The Monkeys has taken on the latest brief for the beef business too.

MLA is rolling out a repositioning campaign for Aussie beef that pitches it as the greatest meat on earth and replaces the 'You're better on beef' strapline which was introduced in 2015.

In the ad, an unsuspecting customer approaches a butcher and asks for 'just a rump steak', much to the butcher’s dismay.

The butcher's team then bursts in to song to explains why beef isn't 'just' beef, it's the greatest meat on earth.

The ad has the hallmarks of the recent ads the agency has created for lamb and features cameo appearances from Aussies “who embody greatness” including cricket commentator Bill Lawry, award-winning actor Kate Ritchie and Olympic gold medallist, Liesel Jones.

The steaks have been rasied

BMF, which has had the account since 1999, is still on MLA's roster, which also includes UM and One Green Bean. Both creative agencies were given this brief for the repositioning. The Monkeys was appointed to the roster in 2014.

Andrew Howie, group marketing manager at MLA, says: “Australia produces the greatest Beef in the world. When it comes to taste, tenderness, flavour and quality, nothing comes close. For most Aussies, Beef holds an important place in their hearts. When was the last time someone raved about the chicken they had for dinner last night?”

Three 30-second edits will deliver messages on why Australian beef is 'the greatest meat on earth' touching on its nutrition credentials, its versatility and range of cuts.

UM has developed a media strategy that focusses on getting the song into Australian vernacular with heavy TV, online and social investment.

It has also partnered with Nova FM to reach a younger audience with a number of brand activations, and year-long digital partnerships with Taste.com.au and GumGum.

Since taking on the business in 2014 The Monkeys has pushed the boundaries for MLA and made its annual Australia Day/summer campaign a must-watch advertising event. It sparked controversy this year by tackling the polarising topic of Invasion Day and pushing a message of unity.