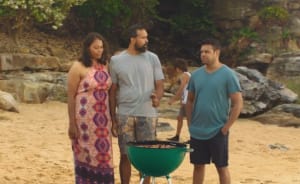 See here for: We don't set out for controversy, we want talkability – MLA marketer

Meat and Livestock Australia (MLA) has forgone its infamous Australia Day ad in favour of a celebration of modern multiculturalism and a play on Invasion Day - how Aboriginal and Torres Strait Islanders refer to the day Australia was founded by British settlers.

The ad, by The Monkeys, opens on the Australian coastline as the nation’s first people search for the perfect spot to fire up a barbie. It doesn’t take long for other revellers to join the hosts.

Every arrival, from the British to European settlers to the most recent of Australian migrants is drawn to the country by the modern day lamb barbecue, each bringing their own dish and unique flavour to the celebrations.

The ad succeeds in showcasing the diversity of Australia and how each new culture has enriched the world's most successful multicultural nation. The spot also takes a clever dig at Australia's draconian treatment of asylum seekers who arrive by boat.

Towards the end of the ad, a British settler declares: “Look, there’s the boat people”. Poh Ling Yeow responds by saying: “Hang on. Aren’t well all boat people?” And then the crowd cheers and the party continues.

It then pans to the "float people", which shows a group of sailor-clad men partying it up on the back of a Mardi Gras-esc float.

While intended as light-hearted and celebratory, the ad may come across as controversial in the eyes of some, as many indigenous people regard 26 January as a sombre reminder of years of white oppression.

MLA group marketing manager Andrew Howie says: “As a brand, Lamb stands for unity. Australia is the greatest country on earth and lamb is the nation’s favourite meat. Hence we have brought those two things together to prove we should be able to celebrate this great country every day of the year.”

The concept of 'Australia Day' has become increasingly controversial in recent years, with some people questioning if the date of the celebration should be changed.

To reflect these community feelings, MLA has labelled this ad as its "January campaign", but taking this tack on such a sensitive issue still shows courage.

True to form, the MLA made sure to give a (soft) shout out to the vegans again this year, who were incensed by the 2016 Australia Day campaign in which an actor puporting to be a vegan was rescued from a room set alight with fire.

As three hipster-clad people approach this year's BBQ, the main actors quipped: “Should we crack a vegan joke?”

It's not only the vegans upset by MLA's recent work, with viewers kicking off late last year following its Spring lamb campaign.

The ad, which aimed to show a modern reflection of Australian culture, faced being banned after viewers expressed concerns it “discrimination on the basis of race”. The ad was ultimately cleared by the ad watchdog.

The script for the ad was leaked in November last year. It was reported at the time the ad would feature Aboriginal people arriving in Australia by canoe, setting up a BBQ for Australia Day and then partying with other cultures.

According to BuzzFeed, the script was leaked because Aboriginal actors were offended by the concept. It went on to say that The Monkeys had found it difficult to cast Aboriginal characters due to Indigenous actors “feeling like the commercial trivialises the violent British settlement of Australia”.

MLA and The Monkeys haven’t shied away from controversy in the past and expect some backlash this year.

The Monkeys ECD Scott Nowell says: “The thought behind the ad this year, and following the evolution of lamb over the past 12 months, was to celebrate all the people who have contributed to making this country great, uniting the way we know best at this time of year, over a lamb barbecue. This time everyone was and is invited to be part of it.”

Last year’s ad starred Lee Lin Chin and focused on bringing overseas Australians home for Australia Day, and reminding them that ‘lamb brings people together’ on the national holiday.