The much anticipated Australia Day campaign from Meat and Livestock Australia has faced backlash for racial insensitivity and displaying “violence” towards vegans.

The ad, which stars Lee Lin Chin, focuses on bringing overseas Australians home for Australia Day, and reminding them that ‘lamb brings people together’ on the national holiday.

Chin is the commander in charge of Project Boomerang who, along with other Aussie legends, brings home expats in time of Australia Day. One of the people Chin's army attempts to bring home includes a vegan who's apartment is set on fire.

It is this scene which has borne the brunt of complaints. One commenter on MLA's Facebook page said: 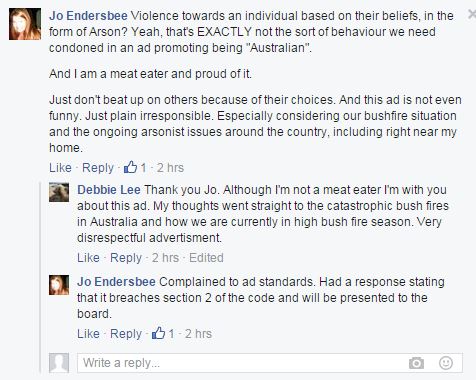 Other comments have been around the use of the term “boomerang” which some felt was insensitive to Indigenous Australians, especially given its timing with Australia Day.

MLA's group marketing manager Andrew Howie told AdNews the overall sentiment in the market has been positive, with the ad already racking up 1.2 million views, making it the organisation's most successful campaign ever despite only being live for two days.

“We are aware of the complaints, which we're in the process of addressing,” Howie says. “The campaign sets out to be light-hearted and entertaining; it's a satirical campaign, it has been since its inception 12 years ago and this year is no different.

"The reason we push boundaries is because we're a producer-owned not-for-profit organisation, we set out to entertain every year, unfortunately in trying to appeal to the masses you are not able to appeal to everybody.”

A spokesperson from the Advertising Standards Bureau confirmed it has had received close to 70 complaints since the ad was launched. While a number of issues have been listed in the complaints, including racial discrimination and violence related to the use of the flame-thrower in the ad, the majority were concerned about discrimination against vegans.

The spokesperson said an extraordinary meeting of the ASB will be convened to review the ad prior to Australia Day.

“In cases where we receive a high volume of complaints in a short time frame (such as this ad) we ensure the case is processed overall in a shorter time frame,” the spokesperson says.

“In the case of MLA, the organisation has always been willing to provide a response to complaint in a shorter time frame than that required by the general process, which also speeds up the timing of getting the case before the board.

“Cooperation of advertisers is key in ensuring the responsiveness of the board.”

It's not the first time MLA has had complaints about advertising. In 2014, its Australia Day campaign, was one of the top complained about ads of the year and saw “lambassador'' Sam Kekovich hand a lamb chop to a toddler wearing a “vegan and proud” t-shirt. Complaints against MLA for the advert were dismissed.

MLA could not be reached for comment by the time of publication.