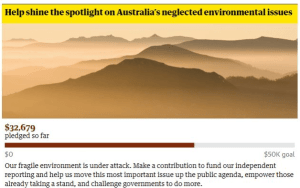 The Guardian Australia has raised more than $100,000 in its first local crowdfunding campaign, doubling its $50,000 goal.

The campaign, which launched yesterday and continues to attract donations, aims to fund a new editorial series on Australia’s neglected environmental issues.

“We know our readers care deeply about the state of Australia’s environment. We commissioned this in-depth series of investigations according to what scientists and conservationists advised us were the environmental issues in most urgent need of attention," Guardian Australia editor Lenore Taylor says.

The 'wide brown land' series launched this week with a story on the erosion of environmental protections. It will run until the end of May.

"The threats to Australia’s environment are real and imminent, yet they frequently do not get the attention they deserve. With the support of Guardian Australia readers, our environment reporters will investigate the issues and what more can be done to protect our natural spaces," Guardian Australia editorial partnerships editor Alexandra Spring says.

The coverage of environmental issues in Australia has been a differentiator for The Guardian since its launched in this market four years ago.

Crowdfunding has been a successful revenue driver for the Guardian’s US operation with the media company running three separate campaigns last year.

The Guardian is still hunting for a local MD.