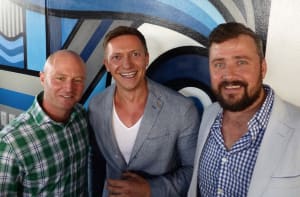 The movers and shakers within the ad tech space show no sign of slowing down, with well-known industry face Chris Brinkworth exiting Ensighten.

Brinkworth (far right), who could often be found vehemently beating the 'educate the industry' drum in relation to all ad tech, data and programmatic themes, has left the company (previously known as TagMan) after more than five years at the firm.

The AIMIA and ADMA speaker, who held the role of regional director Asia Pacific, leaves the business on gardening leave, with his new position expected to be revealed later this month.

Brinkworth, who says on LinkedIn: “Marketing and advertising technology is in my blood,” recently spoke at the Sydney Ad Tech meetup. See Attribution draws ad tech junkies in at latest meet-up.

A spokesperson from Ensighten, which uses tag management to “help the face of digital marketing” by changing the way marketers collect, own and act on customer data across all channels, says it is currently interviewing candidates, but in the meantime, is supported in the region by its technical director and alliance partners.

Other big people moves in 2015 saw head of digital and data at Dentsu Aegis Network’s Amplifi Andrew Reid depart the business after being head-hunted for a role at ticketing, live entertainment and data analytics company, TEG.

Data powerhouse Quantium scored a new hire in the shape of MCN long-timer Murray Love and SpotXchange MD of APAC, Matt Von der Muhll, left the business for mobile-based technology, media and telecommunications startup Unlockd. These were just a few of the big ad tech moves.

Have a job move to report, or a tip-off? Email pippachambers@yaffa.com.au