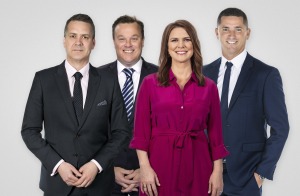 Ten has revealed the names of four of the five key state sales managers for its in-house sales team, with two moving across from the current MCN team.

Joining from MCN is current South Australian lead, Cameron Mudge, who will take on the role of Ten's new Adelaide sales director, while Paul Townsend will become sales director and GM for Perth.

Jackson and Neville’s roles are effective immediately, while Mudge and Townsend will join Ten in December.

“With our brilliant entertainment programming line-up over the coming months, we have a great story to tell and more commercial opportunities than ever," Ten chief sales officer Rod Prosser says.

"Damon, Ange, Cam and Paul are experienced, well-respected leaders in their respective markets.

"They are also passionate about Ten, our multi-platform offering and what we can achieve by bringing the advertising sales team back in-house. Each of them are great ambassadors for Ten, having worked closely with the company for many years."

Last month, Network Ten revealed the make-up of its new in-house sales team via a mass job ad on LinkedIn and its own site.

The national call out followed the news that the now CBS-owned broadcaster would be ending its ad sales partnership with MCN, effective 1 January 2019.